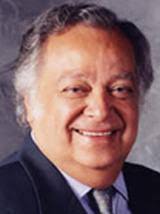 Sir Shridath Ramphal, a national of Guyana, and an international figure of repute received the honour of membership of the Order of the Caribbean Community in the first conferment of 1992.

A recipient of numerous awards and honours from several countries, international bodies and academic institutions, including Knighthood from Her Majesty the Queen of England, he has served with distinction the people of his nation, the Region and the wider international community in a multiplicity of roles.

His involvement with the movement for a West Indies Federation as Assistant Attorney General marked the commencement of a distinctive record of advancing the process of Caribbean development.

The high esteem with which he is held internationally is evident by his membership of several important International Commissions.
Sir Shridath, as he is known to many, was a Cabinet Minister in the Guyana Government and served as Secretary-General of the Commonwealth for fifteen years.

As Chairman of the West Indian Commission, he functioned as draughtsman for the reconstruction and development of Caribbean society.