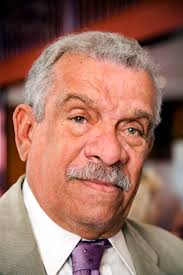 Described as the “Caribbean Community’s greatest poet, playwright and theatrical director”, Dr. Derek Walcott of Saint Lucia received the OCC during the first conferment in 1992.

A literary laureate of high acclaim, Dr. Walcott received the coveted Nobel Prize for Literature in 1992 generating much pride among his fellow Caribbean citizens.

His contribution to the cultural development of Caribbean society, and the creation of a unique Caribbean identity, emerged from his involvement in the theatre and literary movements. He founded the Trinidad Theatre Workshop and created a unique reputation as a distinguished internationally acclaimed Caribbean poet and playwright. His literary works are well known and read internationally.

He was conferred several awards for Poetry and Literature, including the Guinness Award for Poetry, the Royal Society of Literature Award and Britain’s W. H. Smith Literary Prize.

His plays have been performed on many an international stage attracting rave reviews.

Dr. Walcott was appointed Professor of Creative Writing at the University of Boston and continues to be a model of excellence and inspiration for the Caribbean’s literary and theatrical world.