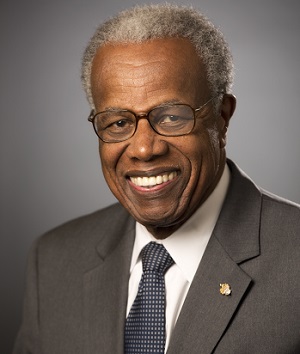 Barbadian Sir George Alleyne’s exceptional accomplishments in public and international health earned him the deserving honour of membership of the Order of the Caribbean Community in the fourth conferment of 2001.

A true believer in the Region of his birth, Sir George Alleyne dedicated the greater part of his career in Medicine and Health Care to uplifting the standard of public health for the benefit of its citizens and the overall process of Caribbean development. He holds the degree of Bachelor of Medicine and Surgery and has the distinguished achievement of attaining the highest rank of Fellow of the Royal College of Physicians and the American College of Physicians.

His very illustrious career spans years of dedication to medical education and health research in the Caribbean and service as Scientific Secretary of the Caribbean Health Research Council.

His highly esteemed tenure in the Department of Medicine of the UWI has had a profound impact on the Region’s Medical and Public Health arena evidenced by the significant number of honours conferred on him by the University’s Medical Alumni and Guild of Graduates. Sir George’s high international reputation as a scholar and professional in the medical and public health fields was responsible for his unprecedented appointment as the first Director of PAHO from the English speaking Caribbean in 1994 and 1998.

He spearheaded the establishment of the Caribbean Co-operation in Health (CCH) Initiative introduced by CARICOM Ministers of Health in 1984 through which he marshalled the Community Members to implement programmes of functional co-operation on health for the benefit of their people.

Sir George Alleyne is a prolific writer and has an enviable collection of over 100 publications to his credit on issues pertinent to public health and medicine in the Caribbean and wider afield.

A recipient of numerous awards for his consistent service and commitment to excellence, he was knighted by Her Majesty the Queen of England, and received several Honorary Doctorates from his alma mater, the UWI and universities in various parts of the world.