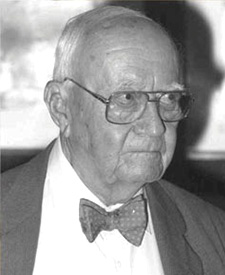 A Jamaican by birth, Sir Philip Manderson Sherlock has been described in the citation for the conferment of his OCC award in 1998 as “the complete Caribbean father figure, an inspiration to generations who knew him and served with him”.

A remarkable Caribbean scholar and educationist, Sir Philip is best known for his long and dedicated service as a member of the University of the West Indies community. This relationship with the Region’s premier institution of higher learning dates back to 1945 when he was appointed member of the Irvine Commission which conceived the University College of the West Indies.

His sterling contribution to the establishment and evolution of the University was marked by his tenure in various capacities which accorded him the privilege to be involved in the birth of new departments and branches of the University. He was appointed Pro Vice Chancellor to the new St. Augustine Campus in 1960 and engineered the creation and restructuring of faculties across the University’s three campuses.

Sir Philip attributed great importance to the University of the West Indies, perceiving it as a symbol of “co-operation of free peoples in a community whose history has been one of competition”.

His knighthood by the Queen of England was one among many prestigious tokens of recognition of the brilliance and superior intellect of this great Caribbean citizen. He received the high honour of the Order of Merit of Jamaica.