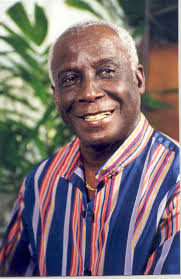 CITATION FOR THE ORDER OF THE CARIBBEAN COMMUNITY, 2008

The computer was a mere thought in 1933, the year Rex Nettleford was born in the parish of Trelawny on the edge of Jamaica’s Cockpit Country. In those days, babies googled when they were fed and felt content – as, no doubt, did baby Nettleford whose mother lavished him with loving care.

Fast-forward to the end of the first decade of the 21st century. In the Information Age ‘Google’ is one of the technological wonders of the epoch; an Internet search engine that at the stroke of the keypad unearths in nanoseconds information on just about anything or anyone of note under the sun.

However, of the over six billion human beings on planet Earth, only those who do not know him would be surprised to discover that if you Google the name Nettleford, the first and dominant listing on the Internet is as follows “Rex Nettleford – Wikipedia, the free encyclopedia”. And that is as it should be since the life work and works of Ralston Milton Nettleford – Rex – are not just noteworthy but are indeed encyclopedic.

Rex Nettleford’s intellectual brilliance and artistic creativity as a choreographer and dancer were recognized from his high school days at Cornwall College in Montego Bay. It was evident from the staging of “Boonguzu” one of his first choreographed dances in 1953 at Cornwall, that he would one day stamp an indelible mark on the field of creative expression that is modern dance. And so he has.

Having left high school on scholarship to the then fledgling University College of the West Indies (London University) to read for a degree in history, he subsequently attended Oxford University as a post graduate Rhodes Scholar in politics.

Nettleford’s choice of disciplines for study was quite deliberate since he had every intention of participating in the dismantling of the colonial regime extant. Immediately he returned home, the young scholar was assigned to the UWI’s Extra Mural Department by his mentor, founding father of the University, Sir Phillip Sherlock. Nettle ford would head this department and eventually nurture it into the School of Continuing Studies; and through it he would pursue his life’s work – the emancipation of the Caribbean colonial mind from mental slavery in its quest for identity.

The Extra Mural department provided Nettleford the perfect vehicle for linking town and gown at two levels: The first was as an academic, where it allowed him to hone in on matters that touched the lives of ordinary citizens, in his research and publications. One of his initial such forays, in collaboration with M.G. Smith and Roy Augier was a seminal study of Rastafarianism in Jamaica; a study that was to give legitimacy to a maligned and marginalized group in the society at the time. Decades later Rasta would give Reggae, Bob Marley, Jimmy Cliff and many others to the world of music on a global scale. And their message would be unambiguously culturally self-assertive and empowering: No need to denigrate others in order to uplift self; a mantra quite in keeping with Nettleford’s philosophy and scholarly pursuits.

That Nettleford found common cause with workers in his development of the University’s Trade Union Education Institute which he simultaneously headed, was also consonant with that philosophy. Today the voice of workers at the work place is not taken for granted throughout the Caribbean, thanks in no small measure to his commitment to their empowerment through education.

At a second level, the Extra Mural department also facilitated if not demanded engagement with the public, non-formally as well as non-traditionally. It was therefore not coincidental that nine years after his first choreographed dance production at Cornwall College, Rex Nettleford co-founded the National Dance Theatre Company of Jamaica (the NDTC), coinciding with the independence of his native land. Almost five decades later the NDTC and singers are almost as synonymous with Jamaica globally as is the name Bob Marley. The Company’s popularity regionally and in the Diaspora emanates from its grounding in the cultural heritage of the folk, to which Nettleford as its artistic director never lost his commitment.

In 1975 Professor Nettleford was made a member of the Order of Merit – the highest non-political national honour of his native Jamaica and he is one of only four Fellows of the Institute of Jamaica the institutional repository of the island’s cultural heritage. When he was selected to be Vice Chancellor of the University of the West Indies in 1996, he was the first graduate of the University to head the region’s premier tertiary level institution. The largest Hall of Residence on the Mona Campus of the University is named after him. And to commemorate the centenary of Rhodes scholarships in the Caribbean, in 2003, the Rhodes Trust established the Rex Nettleford Fellowship in Cultural Studies, to be awarded annually in recognition of his cultural pre-eminence and enormous contribution to Caribbean regional cultural wholeness. Rex Nettleford and His Works: An Annotated Bibliography, edited by Albertina Jefferson, is a 194 page compilation of his scholarly and creative output.

In the international arena, Rex Nettleford has received some fourteen honourary degrees from universities including the UniverSity of Toronto and the University of Oxford whose Oriel College also made him one of its Fellows (of which there are only 69). Professor Nettleford has served in various leadership capacities on numerous regional and international bodies including, CARICOM and the West Indian Commission, the IDRC, UNESCO, the ILO and the OAS. He is also the recipient of the Zora Neale Hurston-Paul Robeson Award for Outstanding Scholarly Achievement from the National Council for Black Studies, USA.

Few, very few indeed, are endowed with Rex’oratorical skills. We all marvel at the way he choreographs ideas as if they were a symphony of movement that, in his words, elevate “the creative imagination” and our “sense and sensibilities”. Who else can create an alliteration of the “uncultured” by visioning that a “bhuto in a Benz is still a bhuto.” Who else can sign his correspondence as “Rex” with the full confidence that the beholder would be in no doubt that the missive from a King called Nettleford?

The Region has shaped this extraordinary person. In turn he has helped to shape and project the Region so profoundly, as a professor, a dancer, a writer, a manager, an orator, a mentor, a critic, a household name, an international icon, a true Ambassador of the Caribbean, a quintessential Caribbean Man. For all these reason and more, the Caribbean Community can do no less than to bestow on him, with its gratitude, the Order of the Caribbean Community while it invites the rest of the world to “Google Nettleford” for inspiration.