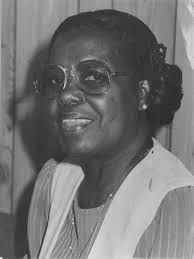 It was most likely that Nesta Patrick, first recipient of the CARICOM Triennial Award for Women, accepted the Honorary Doctor of Laws (LLD) conferred on her by the University of the West Indies at St. Augustine in 2001 with characteristic humility and pride. This marked another milestone in the accomplished life of Ms. Patrick, acclaimed women’s rights activist, social worker and advocate for the recognition of the mentally challenged. To be singled out as the first Caribbean woman to be honoured for outstanding contribution to the region is a testimony to her remarkable sphere of influence and impact on the lives of women and children throughout the Caribbean.

Ms. Patrick’s early passion for social work and the social development of individuals inspired her pursuit of tertiary education which spanned the West Indies, Europe and North America. She attended the UWI in its formative years as the University College of the West Indies, in Mona, Jamaica and subsequently proceeded to the University of Bristol and

Wales in the United Kingdom. These institutions provided the opportunity for her to receive professional training in Social Work, Child Care and Social Development, Policy and Planning. Being raised in a family which valued education and which espoused personal achievement, Ms. Patrick broadened her university experience to include Columbia University and Pace University in the United States from which she graduated with a B.A and MBA in Professional Studies respectively.

Her participation in the first World Conference on Women held in Mexico in 1975 provided the stimulus for a life dedicated to public service and advancing the social and economic development of women. Working for and with the mentally challenged was an immense source of satisfaction and joy for her, translating into an unprecedented commitment to serving their interest and maintaining their placement in the public and regional agenda. She served as President of the Caribbean Mental Retardation Association. The Caribbean Women’s Association (CARIWA) owes its existence to the pioneering work of Nesta Patrick and her fellow co-founders. Retirement is no deterrent to her loyalty and dedication to the condition of women and children. She still contributes her time and experience at the Rape Crisis Centre in Port-of-Spain, Trinidad and working with youth.

Nesta Patrick is a true model of excellence and inspiration for all Caribbean women. Her outstanding career and lifetime achievements merited several honours and awards including the Government of Trinidad and Tobago National Award Public Service Medal of Merit for Community Service bestowed on her in 1979; the Caribbean Award for Mental Retardation in 1978 and the Award for Community Service by the Business and Professional Women’s Club in 1992.

Nesta Patrick’s dream is the attainment of a more even gender balance in society and she admonishes the region’s “educated progressive men and women” to become involved and committed in order to create a gender balance that is lacking in our society.