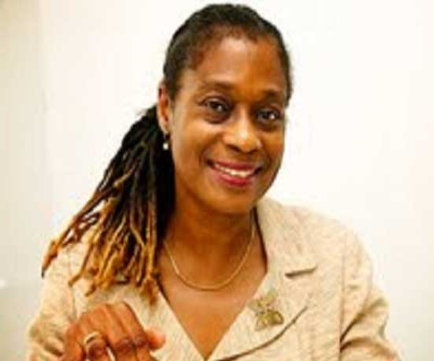 Marion Bethel, Bahamian by birth and quintessential Caribbean woman, is a distinguished attorney, scholar, poet, film-maker, essayist and short-story writer who has gained national, regional and international recognition and acclaim for her advocacy in the areas of gender equality and human rights.
Ms. Bethel’s accomplishments have been shaped through a rich career and distinguished academic pursuits and achievements worldwide.  Our recipient began as a Junior Abroad to the University of Valencia in 1973 and went on to acquire a Bachelor of Arts Degree in Spanish at the McGill University in Montreal in 1975. Immediately after, she completed a Master of Arts Degree at the Teachers College, Columbia University, New York and entered the teaching profession in The Bahamas, eventually serving as a lecturer at the College of The Bahamas.
Ms Bethel’s academic and career aspirations were however, not to be narrowly circumscribed, and in 1984, she was awarded a Bachelor of Arts in Law from Cambridge University, England and admitted to the Bar of England and Wales the following year.  After practicing Law with the Attorney General’s Chambers in The Bahamas, she returned to academic pursuits and in 1990, received a Master of Arts in Law from Cambridge University in the UK. Ms. Bethel has been a partner in the Sears and Company Law Chambers in Nassau since 1994. She has been a member of the Legal Aid Centre, The Bahamas Bar Association, Founder and Co-editor of The Bahamas Bar Journal, and has served on the International Federation of Women Lawyers since 2007.
As an advocate for Human Rights, Ms. Bethel was Co-Founder and Chairperson of The Bahamas Committee on South Africa, and from 1996 to 1997, she was Convener and Chair of the Citizens’ Committee against Violence and the Death Penalty in Nassau. She has been a delegate to several conferences including the Caribbean Regional Judicial Colloquium for Senior Judges on the Promotion of Human Rights for Women and the Girl Child through the Judiciary.
Throughout her career, Ms. Bethel has made significant contributions to advancing gender equality. She is the Founder and Convener of Developing Alternatives for Women Now (DAWN), established in 1986 as a women’s association in The Bahamas, committed to articulating and actualizing the needs and aspirations of women. She served as a member of the National Women’s Advisory Council from 1991- 1996, and during this period, also served on several international committees including the Group of Experts for the Organisation of American States, Inter-American Commission on Women responsible for drafting Model Regulation for Member States on the prevention and elimination of violence against women.
Ms Bethel’s dedication to the cause of women has also found expression in her work as a community volunteer.  She has conducted peer and group counseling for women in crisis, undertaken rape survivor advocacy work and taught English and reading skills at the Women’s Prison in Nassau.
In the field of arts and culture, Marion Bethel has excelled in writing poetry, short stories and essays. In 2008, she co-founded The Bahamas Writers’ Summer Institute, which offers creative writing workshops in poetry, playwriting and screenwriting to emerging and established writers and also engages writers and The Bahamian community in a dynamic conversation on the literary arts, culture, society and the role of the writer. Ms Bethel has also served as guest writer at several notable regional and international meetings for writers and poets, including an International Writers Workshop at the Hong Kong Baptist University. She has also had the honour of serving for a year as the Alice Proskauer Poetry Fellow at the Mary Ingraham Bunting Institute of Radcliffe College, Harvard University.
Not surprisingly, Marion Bethel has been the recipient of numerous awards, among them, the James Michener Fellowship awarded by the Caribbean Writers Summer Institute in Miami, Florida in 1991. As the recipient of the prestigious Casa de Las Americas Prize awarded in 1995 for her volume of poetry called Guanahani, My Love, Ms. Bethel can be justifiably regarded as an important member of that elite group of Caribbean writers whose works have been recognized as making a significant contribution to the regional and global conversation on human rights in general, and the rights and condition of women in particular.
This outstanding daughter of the Caribbean has more recently ventured into yet another area of endeavour to give further voice to her passion and advocacy for women’s rights.  Her recent work, a documentary film entitled Womanish Ways: Freedom, Human Rights & Democracy, the Women’s Suffrage Movement in The Bahamas 1948 to 1962, chronicles the journey to the enfranchisement of women in 1962.   As expressed in her own words:
‘Bahamian women worked tirelessly to resist and redress the racial discrimination and segregation and other social, political and economic inequities that permeated Bahamian society during this period.   Women from all walks of life played a significant role in helping to advance human rights for Bahamians and, thereby, created a deeper understanding of freedom and democracy’.