The Caribbean Community (CARICOM) has been highlighting the importance of early warning systems to the hurricane prone region, at COP 24 – the Climate Change Conference taking place in Katowice, Poland.

The CARICOM Secretariat’s Assistant Secretary-General for Human and Social Development Dr Douglas Slater joined an international panel discussion at the Conference on Tuesday to address the question, “After the devastation from last year’s hurricanes, how is the Caribbean recovering and how important are early warning systems for the region?”

The 2017 hurricane season included the high-impact Category Five hurricanes Irma and Maria, and officials say the widespread damage and tragic loss of life they caused could have been worse without forecasts and warnings.

The Climate Risk and Early Warning Systems (CREWS) Initiative – a partnership between the World Meteorological  Organisation, World Bank and the UN Office for Disaster Risk Reduction (UNISDR) for enhancing climate resilience – has been collecting and compiling lessons on the effectiveness of the region’s early warning systems for the 2017 hurricane season and these were presented at the event.

COP 24, which runs from 2 – 14 December is seeking to advance the practical implementation of the 2015 Paris Agreement on Climate Change. 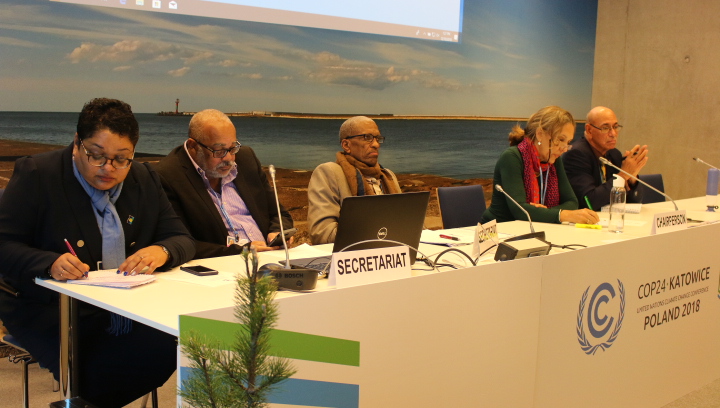 REGIONAL STATEMENT ON THE INTERGOVERNMENTAL PANEL ON CLIMATE CHANGE (IPCC) SPECIAL REPORT ON THE IMPACTS OF GLOBAL WARMING OF 1.5 °C ABOVE PRE-INDUSTRIAL LEVELS (1.5 °C SPECIAL REPORT)