We, the Ministers responsible for addressing climate change in the Caribbean Community:

Recalling the escalated climate change impacts that the region has experienced in recent years with warming of 1.0 °C above pre-industrial levels, including the devastating impacts from hurricanes and tropical storms and other weather-related extreme events, and the adverse effects these impacts have had on particularly vulnerable countries and communities;

Also recalling, the long-standing calls from small island and low lying coastal developing states (SIDS) for limiting the increase in average global temperatures to below 1.5 °C above pre-industrial levels by the end of the century in order to avoid the worst impacts of climate change;

Mindful of  decision 1/CP.21 that invited the IPCC to provide a Special Report in 2018 on the impacts of global warming of 1.5 °C above pre-industrial levels and related global greenhouse gas (GHG) emission pathways;

Welcome the adoption of the IPCC Special Report on the impacts of global warming of 1.5 °C above pre-industrial levels and related global greenhouse gas emission pathways, in the context of strengthening the global response to the threat of climate change, and the challenges it poses to sustainable development, and efforts to eradicate poverty (1.5 °C Special Report) which was approved in Incheon, Republic of Korea, on 6 October 2018;

Also note with alarm the Report’s findings that global warming is likely to reach 1.5 °C between 2030 and 2052 if the global average temperature continues to increase at the current rate;

Further note that there are limits to adaptation and adaptive capacity for some human and natural systems at global warming of 1.5 °C, with associated losses, which could be potentially significant and costly for countries in the region;

Highlight the 1.5 °C Special Report’s findings that holding warming to 1.5 oC throughout the 21st  Century is technically and economically feasible and is likely to have considerable sustainable development benefits;

Further highlight the report’s findings that urgent action on emissions reduction is required, bolstered by real commitment to ambitious action from Governments and non-state actors;

Emphasize the report’s findings that international cooperation is a critical enabler for developing countries and vulnerable regions to strengthen their action for the implementation of 1.5 °C-consistent climate responses;

Reiterate accordingly the 1.5 °C Special Report’s findings that the collective mitigation efforts by countries, as expressed in their National Determined Contributions (NDCs) under the Paris Agreement, are currently inadequate and would result in temperature increases of over 3.0 °C by 2100;

Affirm the importance of forests as a natural and cost effective contribution to global mitigation efforts and renew our call on all parties to recommit to enhanced ambitious action to halt and reverse deforestation and forest degradation, to advance the REDD+ Framework and to optimize the contribution of forests in achieving the 1.5-degree goal

Call therefore upon the international community, starting at the upcoming 24th Conference of the Parties (COP 24) in Katowice, Poland in December, to rapidly increase mitigation ambition and action with a view to achieving a decline in net carbon dioxide emissions by at least 45 % from 2010 levels by 2030, and net zero by 2050;

Stress the importance of having a strong and ambitious outcome to the Talanoa Dialogue at COP 24inclusive of  a COP decision and an accompanying declaration by Ministers, urging countries to bring forward substantially more ambitious mitigation efforts in their NDCs to be communicated by 2020, and encouraging countries to come forward with ambitious long-term low GHG emission development strategies to 2050, that are consistent with pathways for limiting warming to below 1.5 oC and in keeping with the recognised principle of basing an effective and progressive response to the urgent threat of climate change on the best available scientific knowledge;

Emphasize the significance of the 1.5 °C Special Report’s assessment of the work on residual risks, limits to adaptation and loss and damage and note that these are already being experienced by SIDS in the Caribbean and other regions;

Also emphasize the need to address loss and damage in SIDS and other vulnerable countries as an integral but distinct pillar of the Paris Agreement and strongly urge all countries, both developing and developed, to participate actively and meaningfully to this end;

Call for the provision of adequate support to initiatives under the Warsaw International Mechanism for Loss and Damage, including support to enable SIDS to submit proposals to address loss and damage to the Green Climate Fund (GCF);

Also call on the international community to act with utmost urgency to rapidly shift financial flows to facilitate and effect pathways consistent with limiting warming to 1.5 °C;

Urge developed countries on the occasion of the 2018 High-level Ministerial Dialogue on Climate Finance at COP 24 to demonstrate progress towards the mobilization of USD 100 billion per annum by 2020 and to further demonstrate their commitment to efforts to increase that climate finance goal through to 2025.

Stress the importance of achieving a balance in the provision of resources for mitigation and adaptation actions, in particular targeting the needs of SIDS for public and grant-based resources for adaptation and for addressing loss and damage from the dangerous impacts of climate change;

Welcome the launch of the first formal replenishment process of the Green Climate Fund (GCF) and look forward to the timely conclusion of an inclusive process and the development of a comprehensive resource mobilization strategy informed by the latest science, while taking into account the urgent needs of SIDS;

Call upon Parties to ensure that market mechanisms under the Paris Agreement now go beyond offsetting to deliver an overall mitigation of global GHG emissions;

Also welcome the United Nations (UN) Secretary General’s convening of a UN Climate Summit in September 2019, and commit to engage constructively and participate at the highest possible level to ensure its success;

Reaffirm our full support to the Republic of Poland in its capacity as the Presidency of COP 24 and encourage efforts by the COP 24 Presidency, for a strong political and meaningful outcome at COP 24 aimed at continuing to build the momentum in addressing global climate change, and in particular bringing into focus international attention on the special circumstances of SIDS. 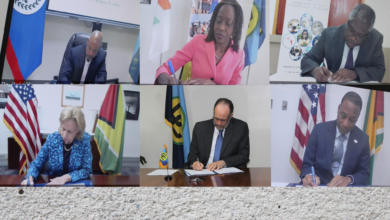