1. In the last twelve hours episodes of tremor normally lasting up to 20 minutes have continued to be recorded.

2. The intervals between the tremors have been between 1.5 to 3 hours.

3. Based on visual observations and satellite imagery, the intervals are associated with periods of explosive activity or enhanced venting.

4. Thunder and lightning were experienced during these periods.

5. Heavy ash fall was observed at the Belmont Observatory throughout the night.

6. Ashfall was also reported to have occurred in most areas of the island overnight and in neighbouring islands: the Grenadines, Barbados and Saint Lucia.

7. Explosions and accompanying ashfall, of similar or larger magnitude, are likely to continue to occur over the next few days.

St. Vincent and the Grenadines Prime Minister Dr Ralph Gonsalves and Lead Scientist monitoring the volcano Professor Richie Robertson provided a joint update to the nation on Sunday morning. They were also joined during the live radio and social media briefing by the Heads of the country’s Water and Electricity entities, who provided updates on the breaks of those services.

Here is the video recording of Sunday’s updates: 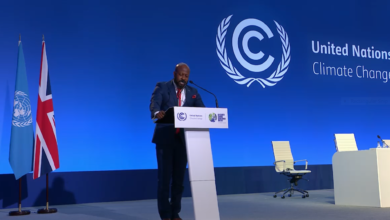 Statement by St. Vincent and the Grenadines at Resumed High-Level Segment of COP 26, Scotland