A Lahar or mudflow which occurred at about 4:00 this morning was the main activity since Sunday’ night’s explosive eruption at La Soufriere volcano in St. Vincent and the Grenadines.

The UWI Seismic Research Centre (SRC) says the mudflow, which lasted for about 30 minutes, may have flown down along a valley on the south-eastern side of the volcano, most likely the Rabacca river.

1. Seismic activity has continued the pattern established after the explosive activity on 18 April.

3. No volcano-tectonic earthquakes or tremor have been recorded in the last 12 hours.

4. The seismic station at Bamboo Range recorded the signal from a lahar (mudflow) at 4 am, which lasted for about 30 minutes and may have flown along a valley on the south- eastern side of the volcano.

5. The volcano continues to erupt. Its pattern of seismic activity over the last few days is typical of the growth and destruction of lava domes.

6. Explosions with accompanying ashfall, of similar or larger magnitude, can occur with little or no warning and persons are advised to stay out of the red zone. 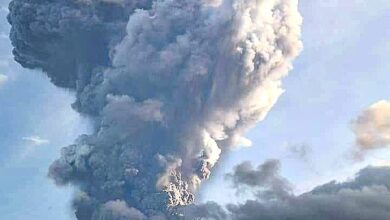