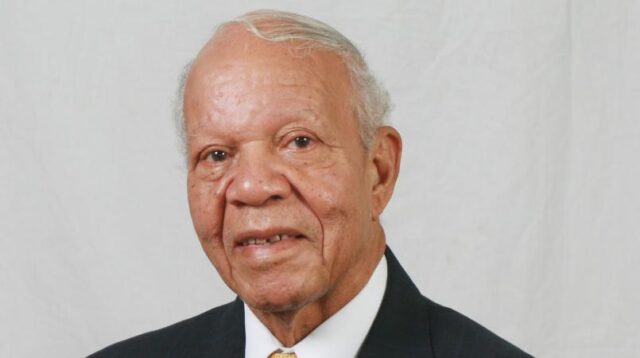 Sir John Melvin Compton, OCC Awardee of 2002, is a Vincentian by birth but sculpted his reputation and legacy as political leader extraordinaire out of the throes of Saint Lucia’s development.

Sir John Compton’s political evolution from Chief Minister, Premier and Prime Minister of Saint Lucia symbolises the interconnectedness of the comity of Caribbean nations and the benefits of free inter territorial movement.

Like so many of his political cohorts, Sir John’s political career built on a solid base in the legal profession having studied law and being called to the Bar in England. His entry into politics formally was as a member of the Saint Lucia Labour Party.

In 1954, he became a member of the Legislative Council and an avid and vocal champion of the cause of the impoverished working class, particularly sugar plantation labour. His political reputation emerged as an anti-colonialist.

Disillusioned over the outcome of efforts to secure the promise of a better life for workers under the Labour Party, Sir John Compton disconnected and formed a new political alliance, the United Workers’ Party under whose banner he campaigned and won the 1964 elections to become Saint Lucia’s Chief Minister.

From this point, he progressed to the position of Premier and finally Prime Minister. He was perceived as the liberator of his nation, propelling it into modernity with major reconstruction of its social and economic base.

Modernisation of Saint Lucia’s utilities, reform of the social sector and a radical programme for rural development, were the hallmarks of his political career.

Sir John’s deep and unswerving commitment to regional unity was a constant of his tenure on the Region’s political stage. He was a pillar of the regional integration movement and participated in many of the institutions that gave birth to and shaped the current form of the Caribbean Community.

His enthusiasm for a system of regional unity was evident by his support for and involvement in the West Indies Federation and the creation of the Caribbean Free Trade Areas (CARIFTA).

Sir John’s legacy to the Region’s development is marked by the role he played in the establishment of key Caribbean institutions, including CARICOM, the Caribbean Development Bank (CDB), the West Indies Association States Council of Ministers (WISA), the Eastern Caribbean Common Market (ECCM), and the Organisation of Eastern Caribbean States (OECS).

The citation for his OCC Award says of him “To his regional colleagues and senior technocrats, he had become the quintessential Caribbean man; ready to dependably support any feasible initiative towards deepening or widening the Caribbean integration movement.”