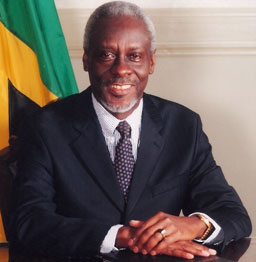 THE MOST HONOURABLE P. J. PATTERSON, ON, PC, OE, QC UPON BEING AWARDED THE ORDER OF THE CARIBBEAN COMMUNITY (OCC), 2 JULY 2009
As I join the pantheon of previous recipients who have made their indelible stamp on the rich tapestry of the Caribbean in the fields of academia, learning, literature, law, sports, medicine, political and institutional leadership, I feel proud and privileged to have been considered so deserving.

I have readily and often confessed that I entered the University College of the West Indies over five decades ago as a Jamaican student, whose knowledge of the Caribbean stemmed from the snippets of its history and geography taught in the classic grammar school, and whose interest was circumscribed by the growing fortunes of the West Indian cricket team.

Idealists, as students should be, we envisioned a future where the peculiar genius of the Caribbean men and women would be spread throughout the region and extend across the universe to the corridors of international power. By the time of my graduation, I had been incurably infected by the regional virus.

It is now far too late to seek any cure. Pride and loyalty to the land of my birth have never deterred me from becoming and remaining an unrepentant regionalist.

What may admittedly have been a sentimental attachment then, has during the succeeding years hardened to a firm conviction that regional economic integration is an imperative; that the assertion of our united voice as sovereign nations in the global arena singing from the same hymn sheet is the only way for any of us to be heard in the global din.

As a result, our own national self-interest, demands that we widen, deepen and strengthen the Caribbean Community. There simply is no other way out especially in these rough and perilous times.

It is by fitting coincidence that this Award is being conferred in the capital city of the Community, where the Georgetown Accord of 1973 was signed and when Heads gather here for what is widely believed to be a meeting which will determine whether we swim safely ashore or drown separately in the Caribbean sea.

While it is true that the cynics who repeatedly have predicted the impending demise of the integration process were hitherto proven wrong, we must not assume that its perpetuity is inevitable. None of our Leaders here can doubt that the people of the Caribbean are eagerly awaiting to hear whether you decide here to keep the boat afloat and if so, how. Its fate lies in your hands.

During its 36 years of existence, the Caribbean Community, like any nation or institution has been forced to confront huge obstacles; to weather prolonged periods of turbulence (for nearly six years no Conference of Heads was convened – yet the other Institutions continued to function and thereby kept CARICOM alive.) That it has managed to endure despite all this does not, however, make its continuing existence inevitable.

Throughout the entire period there have been several areas of success for which no trumpets have sounded or bells have rung.

Many are the notable achievements which we now take for granted:

– we have done well in the pursuit of functional cooperation.

– We have built a strong regional institutional infrastructure in education, health, our response to natural disasters, development financing

– We have seen the promotion and sharing of our creative talents and achieved excellence in the fields of sports, entertainment and culture

– The sturdy barriers to trade and commerce have been dismantled, although every now and then some disturbing glitches appear.

– New entrepreneurial energies have been released and there has been a commendable growth of enterprise.

These positives are not intended to suggest that all is well, but to encourage us on the journey. We are yet to reach the state of perfection but we must not abandon the mission to improve the quality of life for the people of the Caribbean.

The litmus test for effective governance is not measured by the decisions taken when Heads meet. It is whether action follows: The greatest threat to the credibility of CARICOM lies squarely in the failure to implement solemn declarations and decisions made Conference after Conference.

Surely mature regionalism will remain a pipe dream unless authority is vested in an executive mechanism which is charged with full time responsibility for ensuring the implementation within a specified timeframe of the critical decisions taken by Heads or other designated organs of the Community.

For how much longer can a final decision be postponed on upgrading the institutional machinery if the Community is not to become comatose?

My early association with the visionary leaders who made the transition from CARIFTA to CARICOM, my prolonged involvement in the struggle to advance the integration movement and the present fears as to its fate, have prompted me to make a response that goes beyond nostalgic reflections to encompass some observations on the way ahead.

I am acutely aware of the danger in entering any discourse which may be seen as the preserve of the existing political realm. I believe, however, that the span and generosity of your citation entitle me to share a few considerations on the Caribbean in the world of today. You may attribute it all to the musings of a doting grandfather, and so kindly grant me the requisite indulgence.

The challenges which face every Member of this Community today are vastly different and far more daunting than those which existed at its inception.

The special trading regimes and protective arrangements for our sugar and bananas are no more. We are gradually being squeezed out from those areas of opportunity which globalisation and liberation were purported to allow. Instead, globalisation now threatens to overwhelm us all with a worldwide recession. No State, no Government, no Society within our Region is immune from the risk of economic disaster.

But let us not blame CARICOM for this, nor believe the prescription lies in retreating to insularity or parochial responses. Let us instead unleash the strengths that bind our people and thereby fuel the process of economic integration through which we can enlarge the productive capacities of our entire Region.

We in the Caribbean have grown accustomed to weather any storm and all calamities.

But we must look beyond the global crises and seize this as our defining moment to identify those areas where we can increase our productive capacity to provide greater food security, additional processing of agricultural raw materials, energy and mineral resources, information technology, tourism and its linkages with sports, entertainment, culture and the growing services sector.

And in the shaping of the New World Order, which everyone now supports (but which means different things to the developed and developing world), let there be a clarion call from the Caribbean, to make common cause with the rest of the developing world at this juncture with Latin America, Africa, Asia and the Pacific. It was on hallowed ground here in Georgetown, that the ACP was born, which was the key to our breakthrough in the historic Lome arrangements.

Let us explore new and dynamic relationships with nations such as Brazil, Russia, India, China and South Africa.

I have now retired to the pavilion. Allow me to alert you of my intention from there to lead the applause when, as I am sure, this Conference orders the implementation of those issues which have long been outstanding. They include:

– making the Single Market a living reality as you work towards the Single Economy. Unless you settle such issues as competition policy, investment and government procurement, there is the danger of undertaking obligations or conferring rights on external groupings which do not exist between us.

– advancing the protocol on the Contingent Rights of Skilled CARICOM Nationals so that there can be greater freedom on the movement of CARICOM citizens within the Region.

I will try hard to resist the temptation to run onto the playing field and cheer anyone at the wicket when the nod has been given for the CCJ to do all the work it was established and is so well equipped to undertake in providing Justice for our people as the Court of final jurisdiction.

In the Rose Hall Declaration of 2003, we reaffirmed that CARICOM is a Community of Sovereign States but recognized that within this framework it was both legitimate and feasible for a group or groups of community member states to forge such closer links among themselves as they collectively consider appropriate.

The collapse or disintegration of CARICOM is not an option. The Community will lose its way unless you and your Colleagues serve as devoted Trustees to improve the lives of the Caribbean people.

Make CARICOM matter to the worker, the teacher, the student, the businessman, the consumer, the artiste, the farmer, the indigenous people. CARICOM, after 36 years, is still a growing plant which we must nurture. Unless we tend the tree, it will wither and eventually die. Who is prepared to care for CARICOM? Who dares to stand up and be counted so that our Caribbean space can provide both food and shelter for us all?

I am particularly touched at being the only recipient today. I am convinced that the successful outcome of this 30th Meeting will guarantee that I am not the last.

I feel confident in speaking not only for myself, but also for the others who have received your highest accolade that the Caribbean Community is at liberty to call upon each and all of us to give of our experience, or share our expertise in any way that will serve to move our fellow citizens on the path of economic progress and social mobility; to ensure the fashioning of a Caribbean civilization, embedded in strong regional consciousness and rooted in the promotion of human dignity for those who call the Caribbean our only home.