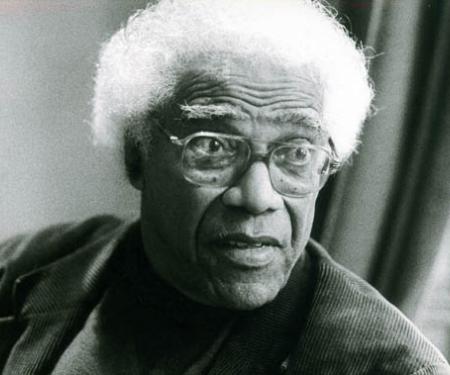 CHB : CITATION FOR THE ORDER OF THE CARIBBEAN COMMUNITY 2008

George Lamming, poet, novelist, essay writer, orator, lecturer, teacher, editor and tireless activist for a new world-order and a New-World order, seems to have entered the world of Caribbean letters as an elder statesman. Born on June 8, 1927 in Carrington Village, Barbados, Lamming attended Roebuck’s Boys’ School from which he won a scholarship to Combermere High School. There, fostered by his teacher Frank Collymore, publisher of the literary journal BIM, who permitted Lamming to use his private library, Lamming developed a passion for reading and began his literary career as a poet.

Recommended by Collymore, Lamming at the age of nineteen gained a teaching position at El Collegio de Venezuela, a boarding school for boys in Port-of-Spain Trinidad, where between 1946 and 1950, Lamming taught English to young Hispanic students before migrating to England in 1950. Lamming encountered England as an already mature and profoundly organic intellectual, whose most vivid childhood memory was of the March 1937 Labour Riots in Barbados, and whose Trinidad experience had exposed him to that country’s poets – Cecil Herbert and Eric Roach – and young nationalistic intellectuals, in those early days of Universal Adult Suffrage, wildcat politics, emergent trade unionism and agitation for social and political reform.

The depths of Lamming’s understanding of social, political and historical issues are soon revealed in his first four novels: In the Castle of My Skin, (1953), The Emigrants, (1954) Of Age and Innocence (1958) and Season of Adventure, (1960). In the Castle of My Skin presents the plantation as economic, social and psychic structure, locating the Barbadian village in its erased history of feudal serfdom, and recognizing the ambiguity of colonial education as an agency of both social emancipation and mental re-enslavement. Lamming’s novels and essays for three decades afterwards would mercilessly scrutinize the new class of intellectual proprietors and overseers produced by that education.

As the idea of a West Indian Federation took shape in the mid-1950’s, Lamming in 1955 dreamed up the concept of the “New World of the Caribbean”, and who together with Martin Carter, Wilson Harris, Arthur Seymour and other writers, celebrated this concept of a new world in four epic radio programmes of readings, in which Caribbean journeys of discovery, migration, arrival, return and reconstruction are recognized as part of the same process of becoming. He then infused his next two novels with this spirit of regionalism, by creating in his imaginary nation of San Cristobal, a composite Caribbean state. In Season of Adventure, San Cristobal combines the cultural features of Trinidad, Haiti and Jamaica, while in Of Age and Innocence, San Cristobal is patterned on the histories and racially tinctured politics of Guyana and Trinidad, with their large African and Asian-ancestored populations. By means of these two novels Lamming holds out to the Caribbean alternative possibilities of redemption and catastrophe, cultural fusion and ethnic fission.

Lamming divined that true political liberation in fragmented multiethnic colonies needed to be based on open dialogue, shared experience and communion both between and within ethnic groups; a communion itself that required trust, absolute candour and honesty between the leadership and populace on the one hand, and between the contesting communities in an ethnically diverse society. Being both realist and dreamer, Lamming recognized that these qualities of openness, trust and candour had never been permitted existence in a colonial situation, and showed how secrecy and mistrust could generate social and political catastrophe. Lamming has since then remained a resolute, eloquent and probably sad prophet against racism in Caribbean politics; a warner, even in the face of past disasters and present disintegration.

Lamming has always written and spoken with a sense of mission. Speaking in 1970 on “The Social Role of Writers” he declared that:

“The writer or artist is, in fact, a citizen and a worker; and his social role should be contained in the process of that work. The novelist or poet in such a society would be performing a social role of the greatest importance by writing the novels and poems which he feels he has to write and which bear witness to the experiences of that society at any or all of its levels. A social function has truly been fulfilled if such work helps to create an awareness of society which did not exist before; or to inform and enrich an awareness which was not yet deeply felt.”

Speaking of his own sense of mission, Lamming defines himself in the same terms that he once used to define CLR James, as “a kind of evangelist. I’m a preacher of some kind. I am a man bringing a message…. I don’t know what you would make of it.” The novel, the essay, the interview, the conversation, the lecture, the great oration — these are simply the different structures through which Lamming brings his messages, be they affirmations or admonitions.

He has delivered his messages all over the world: in Barbados, Jamaica, Trinidad and Tobago, at the Universities of Texas at Austin, Pennsylvania, Miami where he has taught creative writing or attended conferences; in Australia, Denmark, Tanzania, the U.K., Canada, where he has been on lecture tours; in Cuba, Grenada, Guyana, Haiti. He has travelled to all parts of the globe, this youthful veteran of eighty-one years, voicing his messages with the same sense of mission he saw in CLR James; displaying “this intellectual energy… this enthusiasm… this extraordinary optimism about what you have here and what could be made of it.”

In conferring on George William Lamming the Order of the Caribbean Community, CARICOM is honouring fifty-five years of extraordinary engagement with the responsibility of illuminating Caribbean identities, healing the wounds of erasure and fragmentation, envisioning possibilities, transcending inherited limitations. In recognizing this son and ancestor, CARICOM is applauding intellectual energy, constancy of vision, and an unswerving dedication to the ideals of freedom and sovereignty.