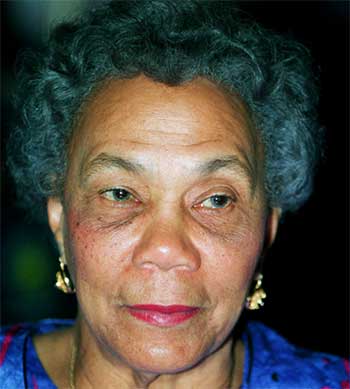 15 May 1919 – Dame Mary Eugenia Charles has the distinction of being the first female lawyer in her native land of Dominica and the first female to be elected Prime Minister in the Caribbean.

Her entry into the political arena came in 1968 owing to the attempt of the Dominica Labour Party (DLP) to have a Sedition Act passed. From then onward she never looked back and confidently blazed the trail for what was to become a distinguished course of statesmanship.

She was appointed to the Legislature in 1970 and to the House of Assembly in 1975. She co-founded the Dominica Freedom Party in 1972 and became the Leader of the Opposition in 1975. Her involvement with her party helped her country relinquish colonial rule on 3rd November, 1978.

Mounting dissatisfaction with the pace of reconstruction after a devastating hurricane helped Ms. Charles lead a political campaign which ensured victory in the 1980 general elections. Thus it was that she was elected Prime Minister, a position which she held for fifteen years. During this period she earned for herself the title of “Iron Lady of the Caribbean”, no doubt because of her indomitable will and unflinching dedication and commitment to set principles and her fearlessness in giving utterance to her beliefs in the face of opposition or maybe, in spite of it.

As Prime Minister Eugenia Charles was instrumental in the introduction of programmes aimed at economic reform and as Chairman of the Organization of Eastern Caribbean States (OECS), encouraged the US led invasion of Grenada in October 1983. She later held the positions of Minister of Foreign Affairs, Finance, Economic Affairs and Defence. Her stand on the regional integration movement can be determined from the following words taken from her address to the 8th Heads of Government Meeting in Castries, St. Lucia in 1987:

“…I am of the firm opinion that CARICOM must continue to exist, but it must exist for the purpose of improving the quality of life of all our people. If it does not succeed in doing this, then we must abandon it. We must emphasize that we are not in CARICOM merely to show that there is “unity” among us in the English-speaking Caribbean – no, we are in CARICOM because the unity it aims at achieving will bring benefits to all our people. Therefore we must work hard at making CARICOM what it should be, what it was meant to be and what in our dignified and formal speeches we say that it is.”

Mary Eugenia Charles was knighted by Queen Elizabeth 11 at Harare, Zimbabwe in 1991, a fitting tribute to her distinguished career as lawyer, politician and journalist. She retired from the duties of Office in 1995 and very soon enrolled at the John Hopkins School of International Studies where she studied the European Union, the United States of America and Canada.

An evaluation of the life of Dame Eugenia Charles reveals that she has herself lived up to her own conception of the qualities of a good leader, and that is, “Leaders must look after the things that need looking after without looking after themselves.”