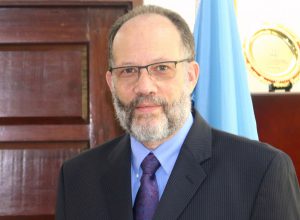 Ambassador Irwin LaRocque, is best described as a regionalist who dedicated his time and effort towards realizing the regional integration agenda set by CARICOM Heads of Government. In doing so he has served as Assistant Secretary General at the CARICOM Secretariat and the seventh Secretary General of our Community.

Ambassador LaRocque was born in the Commonwealth Of Dominica where he received his early education. Subsequently, he attended the Queens College, the New School for Social Research and New York University where he majored in Political Philosophy, Political Economics and Economics.

In the Commonwealth of Dominica he accepted the position of Permanent Secretary in the Ministry of Trade, Industry and Enterprise Development and subsequently served as the Permanent Secretary in the Ministries of Tourism and Foreign Affairs. There is no doubt that his tenure in the Public Service of the Commonwealth of Dominica prepared him for his duties and responsibilities at the CARICOM Secretariat.

Ambassador LaRocque joined the staff of the CARICOM Secretariat in Georgetown, Guyana in 2005 as Assistant Secretary General. In 2011, he was appointed Secretary General by the CARICOM Heads of Government and served for two consecutive terms. Upon his appointment, he immediately became the champion for reform at the Secretariat.

With the assistance of staff, consultants and various organs of CARICOM, the first CARICOM Strategic Plan 2015-2019 was approved at the Conference of Heads of the Government in 2014. The Strategic Plan outlined a framework for social and economic development, with Caribbean citizens as the beneficiaries of the actions to be implemented by the Secretariat, Organs and Institutions of the Community as well as Member States. The preparation and adoption of the first Strategic Plan was indeed a major achievement for Ambassador LaRocque and his staff.

His major achievements are listed accordingly:

His emphasis on and interest in the youth was a major driver of his work. He oversaw the development of the CARICOM Human Resource Development Strategy 2030 and Action Plan and was a keen advocate of the Creativity for Employment and Business Opportunity (CEBO) Programme which fostered an entrepreneurial spirit among our youth.

Secertary-General LaRocque was also instrumental in the Re-engagement of the private sector with regular interaction with Heads of Government and other Community Organs resulting in the formation of the CARICOM Private Sector Organization which was formally established in 2021, and is an Associate Institution of the Community.

He worked to the end, bringing global attention to issues that were significantly impacting member territories, such as; Climate Change; the ongoing Covid 19 Pandemic and in particular the acquisition of vaccines; Blacklisting and De-risking, security, maritime and border protection.

Issues of staff tenure and advancement were fixtures on his agenda, as was the budgetary limitations of the Secretariat and he used every opportunity to dialogue with Heads and colleagues, always hopeful for better outcomes.

Throughout the many seasons of global and regional challenges, natural economic and manmade, Ambassador LaRocque maintained his calm nature and skillfully navigated the Caribbean Community through the raging waters and rugged landscapes.

For his contribution and devotion to Caribbean unity and sustained commitment to regional integration and advancement, we applaud Ambassador LaRocque for outstanding service to the region.

We salute him for leaving and indelible mark on this intuition and the region and confer on him the Community’s Highest Award.