GEORGETOWN, Guyana, Feb 17, CMC – Caribbean Community (CARICOM) leaders have agreed to employ the services of a lobbyist to help the region deal with the issue of de-risking in the banking sector, Antigua and Barbuda’s Prime Minister Gaston Browne has said.

Correspondent banks, which are mainly large, international banks domiciled in the United States of America, Europe and Canada, provide Caribbean states with vital access to the international financial system, by offering services to smaller, domestic banks and financial institutions to complete international payments and settlements.

However, many banks, which provide correspondent banking services have been seeking to manage their risks by severing ties with institutions in the region.

Browne, who is leading the region’s response to the issue, said that the regional leaders, who are ending their two-day inter-sessional summit here on Friday had taken the position on the first day of their deliberations.

“We agreed that we will employ the services of a lobbyist to help us lobby this issue and to make sure that we continue to manage this existential threat that is facing the region,” said Browne, who is also the Chairman of the Committee on Correspondent Banking.

He told reporters that “informally” there has been a stay in banks de-risking.

“There is no formal agreement to that effect, but in terms of the action…we have not seen or heard any such notice for further de-risking,” Browne noted.

Most of the banks that have been de-risked are primarily local banks and Browne warned “if this process continues, then we may end up with a cartel of foreign banks literally operating within the region; and you know the consequences of that: they will continue to gouge us”.

The Antigua and Barbuda Prime Minster noted that 80 per cent of most CARICOM states consume imports, particularly from the United States. Additionally, 16 per cent of receipts and payments are done in United States dollars.

CARICOM, through the Committee on Correspondent Banking, had mounted active advocacy on the issue. Browne said that there has been success in raising the issue with international institutions.

“Even within the US, the Office of the Controller would have issued certain guidelines for correspondent banks to deal with the issue of correspondent banking, and to avert the type of willy nilly de-risking that we have seen in the past,” Browne said.

Meanwhile, Browne, has been commended by his colleagues for his handling of the De-risking issue.

“We congratulate you on your stewardship and advocacy of the Caribbean cause regarding the importance of correspondence banking,” Chairman of Conference, President David Granger of Guyana said.

His sentiment was also echoed by several other colleague heads of government.

Sources close to the meeting said PM Browne described the corresponding bank relations or de-risking issue as “one of the most significant threats facing the region at this time”,

Browne told the leaders that the CARICOM countries had adopted a unified approach to tackling the issue and they implemented a number of initiatives to confront the threat.

Among the strategies, he recalled, was a meeting in Antigua last October that brought together a number of stakeholders in a forum to map out a plan of action for the region. According to the prime minister the meeting was attended by the governors of regional central banks as well as others associated with the issue. But he noted that whilst invitations were sent to regulators from the United States, they stayed away from the meeting.

Browne opined that their absence may have been out of concern that the forum would have been a ‘shame and blame’ exercise.

Browne has also expressed confidence that through its efforts the Caribbean countries have been able to obtain a halt in further de-risking, although he concedes that it is still a threat going forward.

The source said that the the Barbados-based Caribbean Development Bank will convene a meeting in Barbados next week with U.S, Canada and the United Kingdom bank representatives to discuss what they expect from Caribbean banks.

In his report, PM Browne also recommended that the region pool its resources as it seeks ‘push-back’ on the de-risking issue. He also announced that the region has received the commitment from the European Union (EU) to provide resources to help strengthen CARICOM’s ‘technical capacity’ on this matter.

“We must continue to insist on compliance; we cannot afford any Caribbean country to be listed as non-compliant on global standards,” Browne told his colleagues. 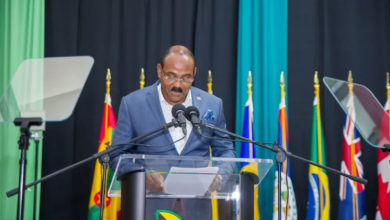 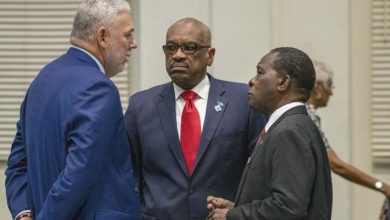