On behalf of the fourteen member states of the Caribbean Community (CARICOM), I wish to express our heartfelt satisfaction at this afternoon’s launch of the International Decade for People of African Descent under the theme “People of African Descent: Recognition, Justice and Development”. We cannot underscore enough the significance of placing today’s launch on this year’s commemoration of International Human Rights Day. The current discord regarding race relations, the injustices of racism, racial discrimination, xenophobia and related intolerance emphasize the large gaps that still exist in the promotion and protection of human rights and fundamental freedoms for all.

CARICOM attaches great importance to the International Decade for People of African Descent, proclaimed by the General Assembly in its resolution 68/237, which will commence on 1st January 2015 and end on 31st December 2024.

As we are about to embark on the critical phase of implementation of the programme of activities commencing on 1st January 2015, we look forward to the work of the Office of the High Commissioner for Human Rights (OHCHR), the designated focal point for the Decade, and anticipate opportunities for meaningful collaboration and engagement with the Office in our region, as well as in Geneva and New York.

The historical basis for the contemporary reality that gave rise to this International Decade for People of African Descent should not be forgotten. Accordingly, CARICOM believes that it is important that we remain mindful of the fact that the vast majority of people of African descent are descendants of slaves who arrived in the New World in shackles; that the form of chattel slavery which our ancestors endured represents the most horrific form of enslavement and forced labour ever seen in the history of mankind; that our ancestors endured centuries of inhuman conditions while building the empires of their enslavers. While these may be inconvenient truths they are, nonetheless, historical facts which significantly influence our contemporary reality such that today, African descendants remain largely dependent on assistance from former enslavers within a dynamic, lacking due recognition and justice and woefully inadequate to meet our developmental needs. Any and all engagement with people of African descent is underpinned by these truths.

In 2013, Caribbean Heads of Government established the CARICOM Reparations Commission with a mandate to research and prepare the case for reparatory justice for the region’s indigenous and African descendant communities. The Commission recognizes the persistent harm and suffering experienced today by these communities as the primary cause of development failure. Consequently, it has developed the Caribbean Reparatory Justice Programme which outlines the path to reconciliation, truth and justice for our region’s indigenous and African descendant population. The Commission also recognizes the special role and status of the European governments in the crimes committed against our indigenous and African peoples, and calls for their participation in this programme.

The Caribbean Reparatory Justice Programme, which was unanimously adopted by the CARICOM Heads of Government in March of this year, possesses key elements, inter alia, the development of cultural institutions; the public health crisis alleviation; illiteracy eradication; development of an African knowledge programme; psychological rehabilitation; technology transfer; and debt cancellation, all of which we believe constructively address reparatory justice for all people of African descent. Furthermore, we believe these elements can meaningfully inform the development agenda of countries whose populations include people of African descent aka descendants of former slaves.

It is significant, too, that the International Decade for People of African Descent falls within the time frame of the Post 2015 Development Agenda which aims to ensure that no one is left behind. People of African Descent are among those who have for far too long been left behind in terms of poverty alleviation and development and this decade provides us with the opportunity to address, once and for all, the root causes.

In this connection, therefore, CARICOM believes that the international community, and international and regional organizations must

Use the decade as an opportunity to engage with people of African descent on appropriate and effective measures to halt and reverse the lasting consequences of slavery, the slave trade and the transatlantic slave trade in captured African people in keeping with the Caribbean Reparatory Justice Programme and to this end, ensure the participation of, and consultation with NGOs, civil society and other relevant stakeholders;

With the proclamation and implementation of a program of activities to complement the International Decade for People of African Descent, CARICOM believes that we have arrived at the crossroads of new possibilities. Due regard for the principles of equality, justice and development cooperation is fundamental to the success of this Decade. The Charter of the United Nations states that its purposes and principles include the

[the achievement of] international co-operation in solving international problems of an economic, social, cultural, or humanitarian character, and in promoting and encouraging respect for human rights and for fundamental freedoms for all without distinction as to race, sex, language, or religion;

CARICOM knows of no other path.  Our member states will continue to engage as we have always done in deference to these principles.  We will work assiduously to ensure that these activities and this International Decade for People of African Descent bring honour and dignity to the people of the Caribbean, the wider community of African descendants, as well as our former colonizers and enslavers.

In this regard, we hold the United Nations to be a centre for harmonizing the actions of nations in the attainment of these common ends. 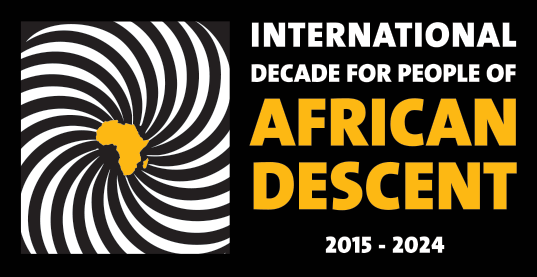 CARICOM deeply committed to Decade for People of African Descent