Cecilia Malmström, Commissioner for Trade
3rd meeting of the EU-CARIFORUM Joint EPA Council
Ministers, Ladies and Gentlemen,
I am delighted to be here with you in Georgetown, capital of Guyana.
I'm happy to because it's my first chance to visit this fabulous part of the world.
I'm also delighted to be here because it is my first chance to meet the whole of the CARIFORUM group of states altogether.
Yesterday, I had the pleasure of meeting Prime Minister Persad-Bissenar of Trinidad and Tobago – the first female leader of that country, I'm very happy to say. But this is my first chance to see the entire region together since I began my job as EU Trade Commissioner last November. I'm very pleased to meet you all.
I'm also delighted to be here for a third reason, because Georgetown is an appropriate place for us to have our discussions.
It was in this city that the Georgetown Agreement, which set up the African, Caribbean and Pacific group of states, was signed 40 years ago. Since then ACP countries have cooperated closely and effectively, making sure that we in Europe fully understand their vital issues.
We are here today to assess the first five years of the new era of relations between the European Union and ACP countries of the Caribbean. So I hope that in 35 years we will be as proud of our achievements!
We have a lot to talk about. So I won't speak for too long. But I would like to give you a sense of how the EU sees these first five years of our Economic Partnership Agreement with CARIFORUM.
I will say a few words on what we have achieved so far where we have so far fallen short and what we can do today to get back on track.
***
What has happened since the agreement provisionally entered into force at the end of 2008?
We have, first of all, taken important steps towards putting this deal into practice.
The EU has a full duty and quota-free regime for products from the Caribbean. And many CARIFORUM countries have taken important steps to lower their tariffs.

Some of the more advanced provisions of the agreement – like services – have also come into force. Progress has been made for example towards the mutual recognition of some
professional qualifications.
Furthermore, slowly, but surely, we have been rolling out the development cooperation part of this deal. For example, the EU and its Member States are now supporting projects that will facilitate tax reform, the development of the private sector and the capacity building of institutions.
As a result of this progress we have seen examples of new ties between our regions and within the Caribbean region itself. UK film studio company Pinewood has invested in the Dominican Republic. And Jamaica-based mobile operator Digicell has expanded to several other Caribbean countries.
Moreover, the review of this agreement that forms the basis of our discussions today points to a positive “EPA effect” on CARIFORUM exports of products like rice, frozen shrimp, citrus and rum. There is also evidence that the Dominican Republic has seen some relative successes in areas like medical devices and textiles.
And it's also worth remembering that the status quo of 2008 was not an option.
The access that ACP countries then had to the EU market was not compatible with the WTO. It had to be changed.
So the choice in 2008 for the Caribbean was between reduced access to the EU under the General System of Preferences or the current arrangement which kept and slightly improved on the previous system. That's the benchmark we need to keep in mind.
***
But even if we do we must also admit that we have not met the objectives we set for this deal in 2008.
The truth is that we have not seen the big increases in trade between our regions that we hoped for. In some cases trade is even lower now than it was five years ago.
And we must acknowledge this fact.
But that does not mean that we should give up on this deal.
And even less so on the whole economic relationship between the European Union and countries of the Caribbean.
In fact it means quite the opposite.
What we have to do is work out why we are where we are.… and then take joint action to put things back on track.
***
So why have we fallen short?
In my view there are two reasons:
The first is obvious. One month – almost to the day – before this agreement was signed, the American bank Lehman Brothers filed for bankruptcy. It was the start of the most serious economic and financial crisis that the world has seen since the Great Depression.
It hit the Caribbean very hard, especially because the region was still feeling the effects of the spike in global food and raw material prices over previous years. As a result, rather than  being able to invest in their future, companies and farmers here have been struggling to survive.
The crisis also hit Europe hard. In fact – as recent news headlines about the EU show – we are still feeling the effects. We have 25 million unemployed people across our Union! One result of that is that our imports have grown much more slowly than would normally be the case. And that affects exporters here in the Caribbean.
I hope that we will soon be able to move to a period of greater global economic stability and growth.
We in the European Union doing everything we can to achieve that – including through trade policy.
But that brings me to a second reason why the results of this deal have been smaller than we expected:
We haven't implemented everything we agreed! 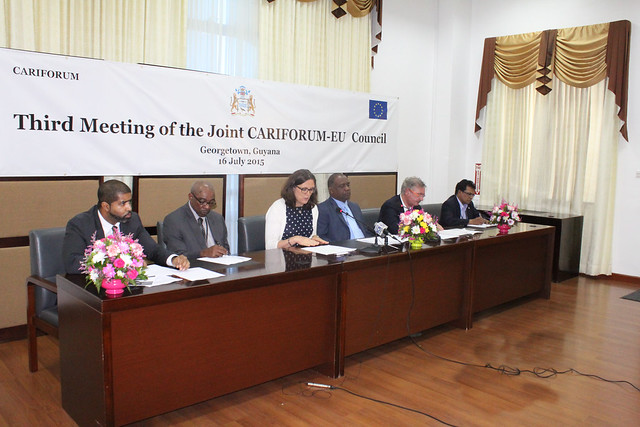 On the Caribbean side, some countries still have to ratify the agreement. Some provisions of the deal to promote regional integration here haven't been put into practice. And rules on competition policy and intellectual property still need to be implemented. All of these reforms are vital. Because they are at the core of the EPA idea. The goal is to develop a larger regional market, with clearer, more transparent rules. That will attract investment and also allow companies to grow stronger. They will then be in a position to take advantage of the legally certain free access to the EU market.
Now, this not to say that the EU doesn't have responsibilities to accept as well. We do.
Some of our Member States still have to ratify the EPA. Getting some of the development cooperation projects off the ground has also taken longer than we would like. I hope that we are now on track for that to take effect. And I'm happy to say that we will have a budget of over 100 million euro for the region to keep us moving ahead over the next five years.
I also know that many of the Ministers here are concerned about the relationship between visas issued by Member States and the EU's commitments on the temporary movement of services providers.
We have now, I believe, made some progress, with more countries getting visa exemptions earlier this year. I am also committed to pushing our Member States to do more. My experience of these issues in my previous role as Commissioner for Home Affairs allows me to say that these are always very politically challenging issues. Though it also means I will do my best to make progress.
Finally, there may also be some issues with the institutions of the agreement itself. We need to make sure they are flexible and that they are focused on solving real problems. We also need to make sure that civil society and business organisations are properly consulted and integrated in our work so we have the right information.
***
Ladies and gentlemen,
These are just some of the areas where the EPA still has scope to be improved.
That means there is huge potential for us to do better – if we set clear, achievable and, above all, shared goals.
That, I suggest, should be our objective today:

A feasible, focused work programme that allows us to move forward together over the next two to three years.
It could include, for example, work on services, fisheries and agriculture; a better monitoring system and a plan to improve the institutions, as I mentioned.
I firmly believe that this agreement can be a powerful instrument to:
 Support innovation, diversification and economic growth,
 Support regional integration here in the Caribbean,
 And create an integrated economic space with clear rules that will help to attract the foreign investment the region urgently needs.
We all need to work together if want to achieve that potential.
I know we will not agree on everything. But I can assure you that I am determined to make
this partnership work for both our regions.
I hope the governments of the Caribbean are ready to play their part too.
Thank you for your attention.
I look forward to our discussion.