on THE OCCASION of

of the PORTUGUESE REPUBLIC (PORTUGAL)

TO THE CARIBBEAN COMMUNITY

Ambassador, I am indeed honoured to accept your Letter of Credence, and to extend congratulations on your appointment as the third Plenipotentiary Representative of Portugal to the Caribbean Community.

I welcome your appointment as a meaningful step towards greater cooperation between the Community and Portugal.

Portugal is a country of rich history with strong traditional ties to the Region. Citizens of Portuguese descent are making significant contributions to our Community, including at the highest level of Government.

I am aware, Excellency, that Portugal has proposed a Draft Protocol on Technical Scientific and Development Cooperation with our Community to give a new, more modern dimension to our relations. The Community welcomes the opportunity to build on existing relations and to learn from your experience. I believe we must seek to advance that proposal during your tenure.

Ambassador, your accreditation comes at a time when Portugal and CARICOM, like the rest of the world, are grappling with the crippling, negative effects of the COVID-19 pandemic. It has plunged countries into social and economic disaster with the widespread loss of lives and livelihoods.

The tourism industry, so important to both your country and our Region, has been perhaps the economic sector most significantly impacted. CARICOM, as the most travel and tourism-dependent Region in the world, has been among the most adversely affected.

Our small and vulnerable tourism-based economies have been decimated, with the result being high levels of unemployment and significantly reduced revenues.

Excellency, our recovery will only begin in earnest when we have access to adequate amounts of vaccines which would enable us to achieve the desired herd immunity, thereby enabling the best conditions in which to fully reopen our economies.

The matter of availability and equitable access to vaccines is, therefore, of urgent importance for CARICOM countries. To this end, the Community has proposed the convening of a Global Summit by the World Health Organisation to facilitate equitable access to and rollout of the vaccines. The support of your Government would be welcome in advocating for the global summit to be convened.

While we highly appreciate the European Union’s (EU’s) contribution to the COVAX Facility, we believe that more can be done by the developed countries to provide access to vaccines for developing countries. More of them should follow Portugal’s highly commendable action of committing 1.75 million doses to its former colonies.

In addition to vaccines, our economic recovery would be further bolstered by access to concessional financing from International Financial Institutions. At present, this is denied to many of our countries, due to the use of GDP per capita as the criterion for access.

Indeed, this criterion also hinders most of our countries, categorised as middle income, from benefitting from the COVAX mechanism on concessional terms. Our Community strongly believes that vulnerability must be a primary factor in determining access to concessional financing.

We would welcome the support of Portugal in using its important voice in the international community, and particularly as the current President of the European Council towards the development of a universal vulnerability index. This would be a fairer criterion than that of GDP per capita.

It is also hoped that Portugal would use its leadership position to promote dialogue between the EU and CARICOM regarding the issue of the unjust and unfair blacklisting of some of our Member States. This unwarranted listing comes despite the fact that our countries have taken huge strides to ensure they meet standards certified by the relevant global authorities.

Support for a meaningful dialogue in addressing this issue is critical, given that blacklisting has caused severe reputational damage to those Member States. It results, among other things, in adversely affecting correspondent banking relationships.

Indeed, there is an urgent need for dialogue at the highest political level between the EU and the Region. This has been lacking in the relationship and there is no denying the need for such engagement.

Excellency, the challenges that confront the Community at present are multi-faceted. One of our Member States, St. Vincent and the Grenadines, is grappling with the social and economic disruption caused by the recent eruption of La Soufrière volcano.

It has uprooted one fifth of the population, made one-third of the country uninhabitable and destroyed a significant percentage of its agriculture. A preliminary estimate of the damage amounts to 50 percent of GDP.

Barbados, another Member State, has also been adversely affected environmentally and economically by the ashfall from the eruption.

Also, our countries continue to combat climate change, a phenomenon which poses an existential threat. The latest scientific report indicates that global warming has already risen to 1.2 degrees Celsius, which brings it closer to the 1.5 degree mark which endangers Small Island and Low-lying coastal Developing States (SIDS), such as our Member States.

In two weeks, we face the start of the annual Atlantic hurricane season with its increasing numbers and intensity of storms. We also experience periods of severe drought and unseasonal weather events.

Although being among the smallest emitters of greenhouse gases, our countries are among the most adversely affected by climate change.

At the upcoming United Nations Climate Change Conference (COP 26) to be hosted by the United Kingdom later this year, we look forward to the strong support of Portugal and of the EU for the positions put forward by CARICOM and other SIDS.

Ambassador, our countries stand ready to build understanding and cooperation as we seek to realise our aspirations for resilience and sustainable development. I look forward to continue partnering with Portugal to assist in achieving our aims.

As you assume your new role as Ambassador to CARICOM, I can assure you of my support and that of the staff of the Secretariat, as we work together to strengthen the relations between CARICOM and Portugal. 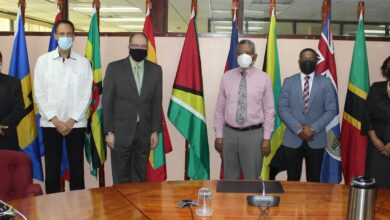 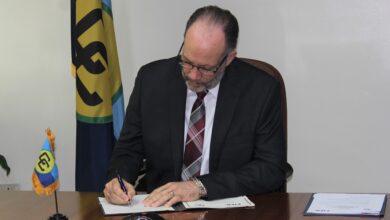 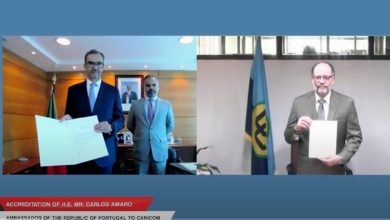 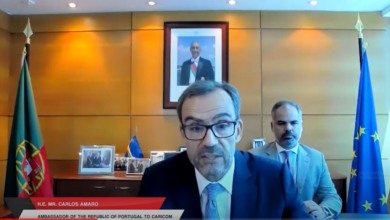 Remarks by Ambassador of Portugal to CARICOM H.E. Carlos Amaro