Your Excellency, Miguel Díaz-Canel Bermúdez, on behalf of the CARICOM Heads of Government, it gives me immense pleasure, to extend to you and your Delegation, warm greetings, as we come together on the occasion of this high-level gathering, commemorating the semi-centennial anniversary, of CARICOM-Cuba relations.

I am honored to be part of this momentous occasion, commemorating 50 years of partnership between CARICOM and Cuba.

And although we still face many global challenges, including the aftermath of the COVID-19 pandemic, and the impact of the war in Ukraine, it remains important to celebrate the 50th anniversary of the CARICOM-Cuba relations, which can be described as excellent and promising.

Fifty years ago, the foundation was laid for building a strong and mutually beneficial relationship, formally underpinned since then by instruments such as Technical Cooperation Agreements, and Memoranda of Understanding.

This exemplary model of South-South cooperation, stems from the historic and courageous act of four newly independent Caribbean States, who established diplomatic relations with their sister nation in the midst of immense political tensions at the international level.

Therefore, the Region is thankful for the courageous act of these first four CARICOM nations: Barbados, Guyana, Jamaica, and Trinidad and Tobago.

The signing on 8 December 1972, of the agreement establishing diplomatic ties with Cuba, was a bold and unprecedented undertaking, which sent a statement to the world that Cuba is integral and vital to the mutual advancement of the Caribbean. And, since the signing, we have experienced consistent regular dialogue and steady strengthening of those friendly ties.

Many developments have tried and tested the fortitude and solidarity of our CARICOM-Cuba relationship. Yet, the Caribbean Community has never deviated from our principled position.

A position I dare say, that is not only consistent with the founding principles of the foreign policies of our respective countries, but also a tribute to the exemplary courage, resilience, resourcefulness and solidarity, displayed by the Government and People of Cuba.

It has allowed our relationship to mature into one of the enduring bonds of trust, respect, friendship, and cooperation, by building on those friendly ties.

It is also good to recognize and recall the great work to initiate and nurture these friendly relations, undertaken by some who are still among us or have already departed.

I particularly mention the role of the late Foreign Minister of Cuba, Ricardo Alarcón, who led negotiations to establish diplomatic ties with the first four CARICOM nations. We owe it to them to build on their pioneering work and solidify the partnership.

It is deeply symbolic that we should be hosting this meeting here in Barbados, forever etched in our Region’s history as an original signatory of the monumental agreement that has allowed us to come together for this Eighth High-Level Summit.

Let me at the outset, extend appreciation to the Government and People of Barbados, for the arrangements put in place

for hosting the Eighth Summit of the Heads of State and Government of the Caribbean Community and Cuba.

The warm welcome and generous hospitality extended to CARICOM delegations, on our arrival, and the sustained warmth and affection extended throughout our stay, have framed the context for a successful Meeting.

Therefore, I take this opportunity to express gratitude to the Prime Minister of Barbados, Mia Amor Mottley, for hosting us here in Barbados.

I trust we will have frank and robust discussions on the issues before us, and deliver tangible results, for the benefit of our respective countries and peoples.

The agenda affords us the opportunity to further the badly needed dialogue, among others, on agriculture and food security, disaster prevention and management, and climate change.

Since we last met, virtually, on the occasion of the Seventh CARICOM-Cuba Summit, several significant developments have taken place in our hemisphere and globally.

Negative externalities and socio-economic challenges have arisen that exacerbate regional vulnerabilities, and have resulted in significant setbacks to the Region’s developmental agenda.

The protracted and multifaceted crises resulting from the COVID-19 pandemic, have levied disruption and hardship in nearly every aspect of our lives, despite our return to a semblance of normalcy. It continues to weigh heavily on the global economy.

Our high-level political dialogue is also taking place during a period of geopolitical uncertainty, due to deeply divisive and challenging issues.  These challenges compel us to continue strengthening our collective actions.

And as we do so, we are comforted in knowing that since the establishment of our intra-regional relations, the CARICOM-Cuba relationship has remained robust in spite of various hegemonic forces, and the ever-changing hemispheric and international geopolitical environment.

As small states with limited resources, it is imperative that we pool our efforts, and stand behind common rights and principles, to advance our objectives.

These fundamental rights and principles, outlined in the United Nations Charter, include imperative tenets such as non-interference, non-intervention, prohibition of the threat and use of force, the rule of law, and the right to self-determination.

When respected, they have provided a protective cover for the security, territorial integrity and sovereignty, of small states against significant global powers, and regional hegemons.

The unjust and unilateral imposition of the financial, commercial and economic embargo on Cuba, is a prime example of the violation of these principles.

The Caribbean Community condemns unreservedly, the continuation of the economic, trade, and financial embargo, imposed on Cuba by the United States, and is steadfast and unrelenting, in our calls for its immediate cessation.

I would like to recall the statement of CARICOM, during the SUMMIT OF THE America’s earlier this year, in the exclusion of countries to the Summit.

Caricom made clear that it is incomprehensible that countries of the Americas, including Cuba, which have provided strong leadership and contributed to the hemisphere on critical issues of our time, were isolated from the Summit.

We in CARICOM, remain committed and constant in our advocacy for Cuba to be fully integrated into all aspects of hemispheric and international relations, and trade.

Suriname also offers its unwavering support to Cuba in relation to the call to end the unfair and unjust economic, financial, and commercial blockade against Cuba.

Cuban diplomacy is justifiably regarded for its soft-power assets, especially South-South Cooperation, and international solidarity, which has always been the cornerstone of Cuba’s foreign policy.

CARICOM Member States have been long-standing beneficiaries of these cooperation frameworks, and the generous and highly significant technical assistance which Cuba renders to the Community.

As the Chairman of the Caribbean Community, I wish to place on record our gratitude for these fraternal gestures, and thank our sister nation of Cuba, for its unwavering support to CARICOM.

This assistance has facilitated the building of regional capacity in critical areas, such as public health, infrastructure development, agriculture, and disaster management, in addition to socio-cultural fields of import.

Without the assistance of Cuba, the Region would undoubtedly be confronted with far higher debt and stunted development.

The waters of the Caribbean and Atlantic, interconnect our Countries with a shared culture, heritage, and history.

And not to be forgotten, year after year, these same waters serve as devastating reminders of the risks posed to our joint and symbiotic development aspirations, as People and Small States of the Caribbean.

As such, the intensification of the Region’s natural disasters demands, that as Heads and Custodians of the collective aspirations of our Caribbean People, that we too, intensify our pursuit of sustainable development.

We are reminded that Climate Change will bring even more frequent and intense storms, severe droughts, and other unusual climatic events that carry an existential threat to our Region.

It is in the context of this unavoidable truth, that I wish to express our collective sympathies to the Governments and People of our Community, who have been impacted by severe natural disasters since our last high-level CARICOM-Cuba summit.

In particular, on behalf of the Community, I would like to convey heartfelt condolences and solidarity, to the Government and People of Cuba, following the destruction and loss of life, wrought by Hurricane Ian.

As we come together for this, the Eighth CARICOM-Cuba Summit, and look towards another five decades of cooperation, CARICOM remains convinced that advancing cooperation with Cuba, at all levels, advances solutions to the series of phenomena which threaten the achievement of our high social impact goals, and as such, compel prodigious determination.

This Eighth Summit, provides us with the opportunity to reaffirm our shared commitment to South-South Cooperation, in the promotion and protection of our common interests, including development cooperation and trade, commercial, and economic relations.

As we embark on our deliberations, we are confident that they would further strengthen the friendly and robust relationship which has been forged between CARICOM and Cuba over the past 50 years, and aid in efforts in order to improve the productivity, infrastructure, and connectivity of our countries.

I encourage us all, to use this opportunity, to come up with concrete actions, with clear indicators of success.

I look forward to fruitful deliberations and dialogue during this Summit, with great solutions for our Region reaching great prosperity, sustainable development, and security.

I thank you, and God bless you all. 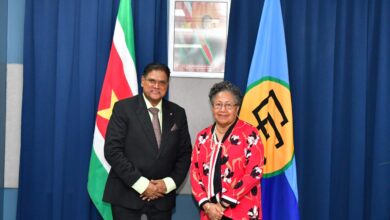 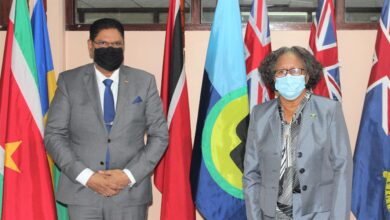