Representatives of the OECS Commission

Representatives of Associate and Community Institutions

It is my distinct honour to welcome you to the One Hundred and Third Special Meeting of the COTED – Environment and Sustainable Development.  It has been quite some time between meetings, and I am quite pleased that we have established a quorum of Ministers and trust that this signals a new day in the COTED – Environment and Sustainable Development.

Ladies and Gentlemen, the World has gambled on the climate status quo and lost. This, in my mind, represents a sad reflection on those who claim to be committed to protecting our planet and continuously buffet us all with their pious platitudes and soothing solemn noises, but at the drop of a hat, eschew all those principles.  Indeed, at this juncture, we seem to be facing a paradox of development whereby, in a few short months of the Russian invasion of Ukraine, several countries including China, Germany, Italy, Austria, and the Netherlands, have all signalled their increased utilisation of coal-fired power plants, in an effort to treat with their fuel demand.  Indeed, in the case of the Netherlands, coal power stations that had been previously limited to 35% of output for 2022-24 are now being operating at full capacity.  For the U.S., energy security has trumped climate change mitigation, with current exhortations trumpeting increased oil drilling.  Indeed, for the developed countries, which remain the largest contributors to the greenhouse gas emissions, the operating maxim seemingly oscillates between “Drill baby Drill” and “Burn baby Burn”, whereas for the Region, our guiding principles remain enshrined in “1.5 to stay alive”.  This is particularly poignant, as global warming represents an existential threat to our Region, and whereas we have been advocating for mitigation measures that will limit the increases to 1.5 degrees Celsius, the sad truth is that on the trajectory prior to the war, temperatures were slated to increase by 2.7 degrees by 2050 or 3.1 degrees by the year 2100.  Scientists say that even if the World hits the 2-degree goal in the 2015 Paris Climate Pact and the 2021 Glasgow follow-up Agreement, that would still lead to higher seas, stronger storms, extinctions of plants and animals, and more people dying from heat, smog and infectious diseases.

Hence, what makes current developments particularly disconcerting is that these new investments that are being encouraged in oil and coal, in particular, represent long-term commitments which, as a matter of common sense, cannot or will not be abrogated once the geopolitical tensions subside but are likely to engender irreparable harm to the achievement of previously agreed commitments. Interestingly, there was a 10% rise in investment in coal supply in 2021, led by emerging economies in Asia, with a similar or perhaps more practically higher increase likely in 2022.  Therefore, we can only reasonably conclude that the emerging trends are suggesting that carbon neutrality has most certainly been relegated to a secondary position in the geopolitical calculus.

Thus far, in the Region, we have witnessed several environmental challenges such as deforestation, land encroachment, coastal erosion, biodiversity loss, and flooding.  These challenges range from the sweeping Jamaican Blue Mountain range in the North, to the verdant Rupununi Savannahs of Guyana in the South, to the Maya Mountains Massif of Belize in the West, and to the Savannes Bay Ramsar site in Saint Lucia in the East.  Therefore, ladies and gentlemen, what we are confronted with presently is really the mere tip of a fast-melting iceberg.

The scenario is likely to become even more complicated, with the expectation of a global recession in 2023 or, at best, the visitation of stagflation on some of the World’s larger economies, with the attendant downstream impacts on developing economies.  This will likely manifest in a slowdown of Official Development Assistance funds and realistically suggest that the commitment of the G7 countries, in 2009, to provide $100 billion every year, through 2025, in climate funding for developing countries will be more challenging to realise. Nonetheless, the expectation remains that these funds will be disbursed in addition to ODA and in the form of grants over loans so as not to adversely impact the debt profile of low-income and vulnerable countries.

Further, it is worthy of note that, worldwide, 67.5 million gas-engine passenger vehicles were sold last year – 15 times the number of Electric Vehicles (EVs) – according to British research firm, LMC Automotive, but EV sales are on pace to reach 46.98 million in 2033, or 20% more than gasoline cars.  This translates to a tenfold expansion in the EV market over 12 years, which is of particular relevance, as the EU is slated to ban the production of the internal combustion engine, by 2035, with Nissan in Japan also following suit.  The move comes as policymakers worldwide tighten restrictions on vehicle emissions, to promote a shift to EVs.  In Europe, new Euro 7 emissions standards are on track to go into effect as early as 2025, with some manufacturers determining that these rules will raise the cost of developing internal combustion engines to unsustainable levels.  Whereas there are some companies that are seeking to develop workarounds in the interim, the trajectory is clear.   These developments will also have a transformative impact on our Region and requires proactive and meaningful engagement with stakeholders, to ensure that persons are sensitised to the issues and can be guided in making their purchasing decisions.

On our part, this will require a strategic shift in our development model to be even more inclusive.  In fact, it is time that, as a Region, motor vehicles are recognised as tools of trade rather than for pleasure and, in so doing, reassess the applicable import duty framework, which would actively discourage the dumping of vehicles in our markets when the transition to EVs becomes more pronounced.

However, we have to take cognizance of the fact that today’s high energy prices are driving oil and gas producers’ income to an estimated US$4 trillion in 2022, but clean energy investment is set to make up only 5% of oil and gas companies’ capital expenditure, which rose by 1% in 2019 but clearly needs to go much higher.  Obviously, the oil producing nations in the Region will benefit from this windfall, but for them, it is not a binary choice between the energy crisis and the climate crisis and, commendably, they are treating with both.  Indeed, the windfall gains could be used, in part, to fund the requisite investments in hydrogen and biofuels.  They could also be used to foster the elimination of methane emissions, which are technically abatable at a cost of approximately US$11 billion per annum. There are also opportunities for investment in wind, solar, and hydro projects, with above market rates of return.  The point is that, even in these extraordinary times, there are opportunities for the trajectory for meaningful climate change adaptation to remain unaltered.

Further, the blueprint for our survival must be under-pinned by these strategic alliances, legislative, and institutional strengthening, coupled with greater levels of public education and effective advocacy.  Indeed, the so-called tension between environmental management and economic development must be confronted and, in that regard, the requisite laws must be strengthened to bring order to the process of development, while moral suasion and continued public engagement and education must be strengthened in order to dispel the notion that, somehow, sustainable development is inimical to the achievement of economic growth.

Indeed, it is incumbent on us to pursue a sustainable development model that is more inclusive and facilitates deeper engagement and, in that regard, it might be useful to pursue a more aggressive communications strategy that facilitates the strategic pivot from being reactive to being proactive.  For too many in the Region, climate change is still some esoteric concept pursued by academics.  This would suggest a need for a reengineering of the current approaches.

In fact we require a whole-of-society and cross-sectoral approach to improving our relationship with the environment while achieving more effective and efficient growth, to improve coordination and break down traditional siloed approaches.  In this regard, Sustainable Consumption and production encompasses but is not limited to –

We also need to step back and take stock, as we seek improved coordinated approaches in environmental governance at the regional and international levels.  The sheer number of Multilateral Environmental Agreements (MEAs) in existence, their mandates and obligations, and their expected outcomes all present a challenge to implementing Parties.  Notwithstanding the ratification and support from countries in taking some actions to impede environmental degradation, developing countries – especially Small Island Developing States (SIDS) – face considerable challenges in the implementation of and compliance with these MEAs owing to the lack of capacity within their remit, including, inter alia, human, financial, and technical.

Only when we undertake this dispassionate analysis will we be able to truly craft an optimal strategy in this environment of change.  We no longer enjoy the luxury of time and with what has transpired over the last few months, this is the time for us, as a Community, to strengthen our resolve.  “1.5 to stay alive” is not merely a slogan but a call to action.  Let us respond to that call with alacrity, dedication, and steadfastness bolstered by scholarship, as we collectively continue on this journey to protect Our Planet, Our Home. 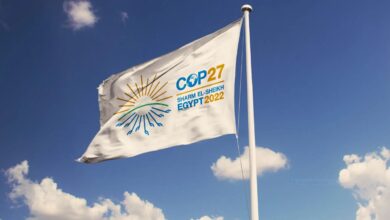 CARICOM Ministerial Statement ahead of COP 27 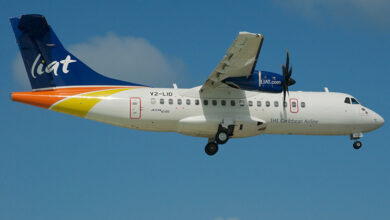 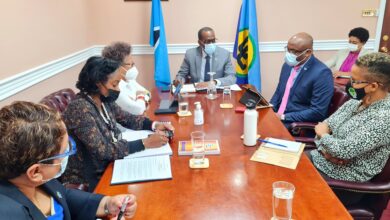