Caribbean Community (CARICOM) Heads of Government will deliberate on several major issues, including the Region’s post-pandemic economic recovery, when they gather on San Pedro in Belize for their Thirty-Third Inter-Sessional Meeting on 1-2 March 2022.

The Meeting, under the Chairmanship of Prime Minister Mr. John Antonio Briceño of Belize, is also expected to address advancing the implementation of the CARICOM Single Market and Economy (CSME), regarded as the Region’s most practical option for responding to current economic challenges, and building a more resilient Caribbean Community.

The situation in Member State Haiti, including the current political impasse and security and socio-economic challenges, will also be examined. Heads will also discuss the regional security situation including any new challenges from the period of the pandemic.

The Meeting is expected to advance the CARICOM Agri-Food systems agenda with recommendations for regional food and nutrition security.  The Heads are also expected to engage representatives of the Private Sector, Labour and Civil Society.

Climate Change, an existential threat to Caribbean small island and low-lying States is also before the Meeting, which will assess the outcomes of COP26 – the last global Climate Change conference in Glasgow, and begin to outline the Region’s plan of work for COP27.

This will be the first in-person CARICOM Heads of Government Inter-Sessional Meeting for the Secretary-General and new Deputy-Secretary General Dr Armstrong Alexis who took up their positions last August and November respectively.  Two new Assistant Secretaries-General – Ambassador Donna Forde who heads the Foreign and Community Relations Directorate and Ambassador Wayne McCook who heads the Single Market and External Trade Directorate, are also attending their first Heads of Government Meeting.

Following the Inter-Sessional Meeting, CARICOM Heads of Government will join their Central American counterparts for the Fourth CARICOM-SICA summit on 3March, also on San Pedro, Belize., where the two Regions will seek to build on common interests and challenges, including the current pandemic and climate change.  United Nations Secretary-General Antonio Guterres is expected to address the gathering. 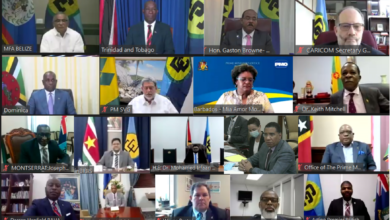 Statement by the Caribbean Community on Haiti