Foreign Ministers of the Caribbean Community (CARICOM) and the United States Secretary of State agreed on the need to work together on a number of issues of mutual interest.

In a virtual meeting on Wednesday 21 April, the two sides noted the inextricable link between the Community and the US and welcomed the Roundtable Discussion as an initial engagement between the new US administration and CARICOM. Honourable Eamon Courtenay, Minister of Foreign Affairs, Foreign Trade and Immigration of Belize and Chair of CARICOM Council for Foreign and Community Relations (COFCOR), US Secretary of State Antony Blinken and CARICOM Secretary-General Ambassador Irwin LaRocque made opening statements.

All three speakers expressed support for St Vincent and the Grenadines as the country grapples with the on-going eruption of the La Soufriere volcano. Both Minister Courtenay and the Secretary-General spoke to the need for access to concessional development financing based on vulnerability, especially in this challenging period for the Region given the Covid-19 pandemic, the La Soufriere volcano and the upcoming hurricane season.

The discussions at the meeting focussed broadly around the Covid-19 pandemic and its health and economic fallout, recovery of the regional economy, climate change and democracy, human rights and security.

The CARICOM Ministers took the opportunity to urge the US to assist with access to much needed vaccines which was an imperative for the region to emerge from the economic devastation caused by the pandemic.

Secretary of State Blinken stressed his determination to strengthen co-operation and co-ordination and stated that he would engage with his colleague US Cabinet Secretaries on the issues of mutual interest raised by the CARICOM Ministers. 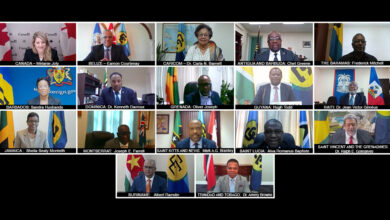