There is no doubt that the events of 2017 will have a lasting impact on our Community.  The ravaging effects of this year’s hurricane season will cast a long shadow over our Community for some time yet.

Six of our Members and several of our Caribbean neighbours experienced the wrath of unprecedented back-to-back Category 5 Hurricanes Irma and Maria.

The heavy toll of lives, property and infrastructure had an effect wider than the affected countries.  Our Community has bonded together, as its governments, people and institutions render yeoman support to the stricken countries.  The international community has been at our side in the relief undertaking in a highly appreciated show of solidarity.

The Caribbean Disaster Emergency Management Agency, (CDEMA) the Community’s specialised institution, performed magnificently as it coordinated the relief efforts and helped to set the stage for recovery.  I must extend the Region’s gratitude to the Agency for a job well done.  The Caribbean Catastrophe Risk Insurance Facility (CCRIF) was also prompt in meeting its commitments to the affected countries with the appropriate policies. 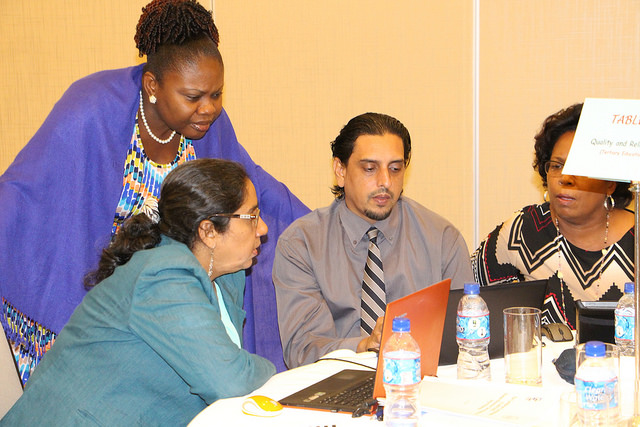 Participants at an HRD workshop

The climatic events that we have been enduring, whether floods, droughts or storms have become our new normal.  We are living climate change.

The recovery and reconstruction phase is underway with an emphasis on building resilience in our Community to withstand the expected onslaught of more intense and frequent storms powered by the effects of climate change.  Given the magnitude of the damage caused by the hurricanes, the Region cannot rebuild without the support of the international community.

Last month, in collaboration with the United Nations Development Programme (UNDP), we sought their assistance at the CARICOM-UN High Level Pledging Conference; Building a More Climate-Resilient Community.  The process of ensuring that the financial and technical assistance offered there will reach the affected countries is in train.

It is encouraging to note that our relentless advocacy with respect to the lack of access to concessional development financing appears to be bearing fruit. There is some re-thinking on this issue taking place at the level of the International Financial Institutions (IFIs) and some of our international development partners (IDPs).  The stark reality of our vulnerability to external shocks, including climatic events, was laid bare by the twin assault of the Hurricanes.  This emphasised the urgent need for the international community to dispense with GDP per capita as a primary criterion for access to concessional development financing.

Classification of most of our Member States as middle to high income countries denies them access to such funding.  The criteria must now take into account our vulnerability as a matter of urgency.  We will continue to advocate strongly for this change and to seek the help of friendly countries in this regard.

Significant advances were made in the past year, particularly in regard to human resource development and energy.  In July, Heads of Government received and endorsed the Human Resource Development 2030 Strategy.   The Strategy was drawn up in recognition of the imperative for a radically reformed system to address the requirements of 21st century economy and society.  It outlines actions for basic education, from early childhood through secondary, the tertiary sector and life-long learning.

Also in July 2017, Member States signed the Agreement establishing the Caribbean Centre for Renewable Energy and Energy Efficiency (CCREEE).  The Centre is based in Barbados and is the implementation hub for sustainable energy activities and projects within the Region.  The Strategic Plan for the period 2015-2019 identified energy as a key driver in the pursuit of economic and climate resilience building within the Region.  The Centre will play a major role in the Community’s thrust to increase the renewable energy share in power generation to 47 percent by 2027, with the resulting lowering of costs to the consumers and benefits to the environment.

We were able to expand opportunities for our private sector with the signing of the Second Protocol to the CARICOM-Cuba Trade and Economic Cooperation Agreement.  This Protocol allows for duty free access to Cuba for CARICOM producers of approximately three hundred items which include meat, fish, dairy produce, fruits and vegetables, beer, rum, cement, soaps, articles of apparel and clothing.

CARIFESTA XIII in Barbados was another highlight of 2017 bringing together the peoples of CARICOM as well as the wider Caribbean, under the theme ‘Asserting our Culture: Celebrating Ourselves.’  The enthusiasm for the cultural extravaganza was not dampened by the threat of Hurricane Harvey as the people of the Caribbean showcased their creativity at various venues across the island.  The business aspect of the creative industries took center stage in keeping with the Heads of Government endorsement for exploring the potential of the cultural and creative industries to contribute to the economic development of the Region.

As the year ends we are just past the midway point of our Strategic Plan and in the final stages of making the transition to a Results-Based Management System for the Community.  This will enable us to measure the benefits being provided to our Member States as well as make us more accountable to the people of the Community.

The task ahead in 2018 and beyond is not an easy one.  But we have shown that we are a resilient people and we have demonstrated time and again that we achieve our best results when we work together.  The same spirit and energy that drive us to be each other’s keeper in times of disaster is what we need to propel our integration movement forward.  Let us harness that spirit and energy and build a truly resilient Community that benefits us all.

I wish all happy holidays and a productive, prosperous and happy 2018 and urge that we keep in our thoughts those for whom the holiday cheer will be muted this year.