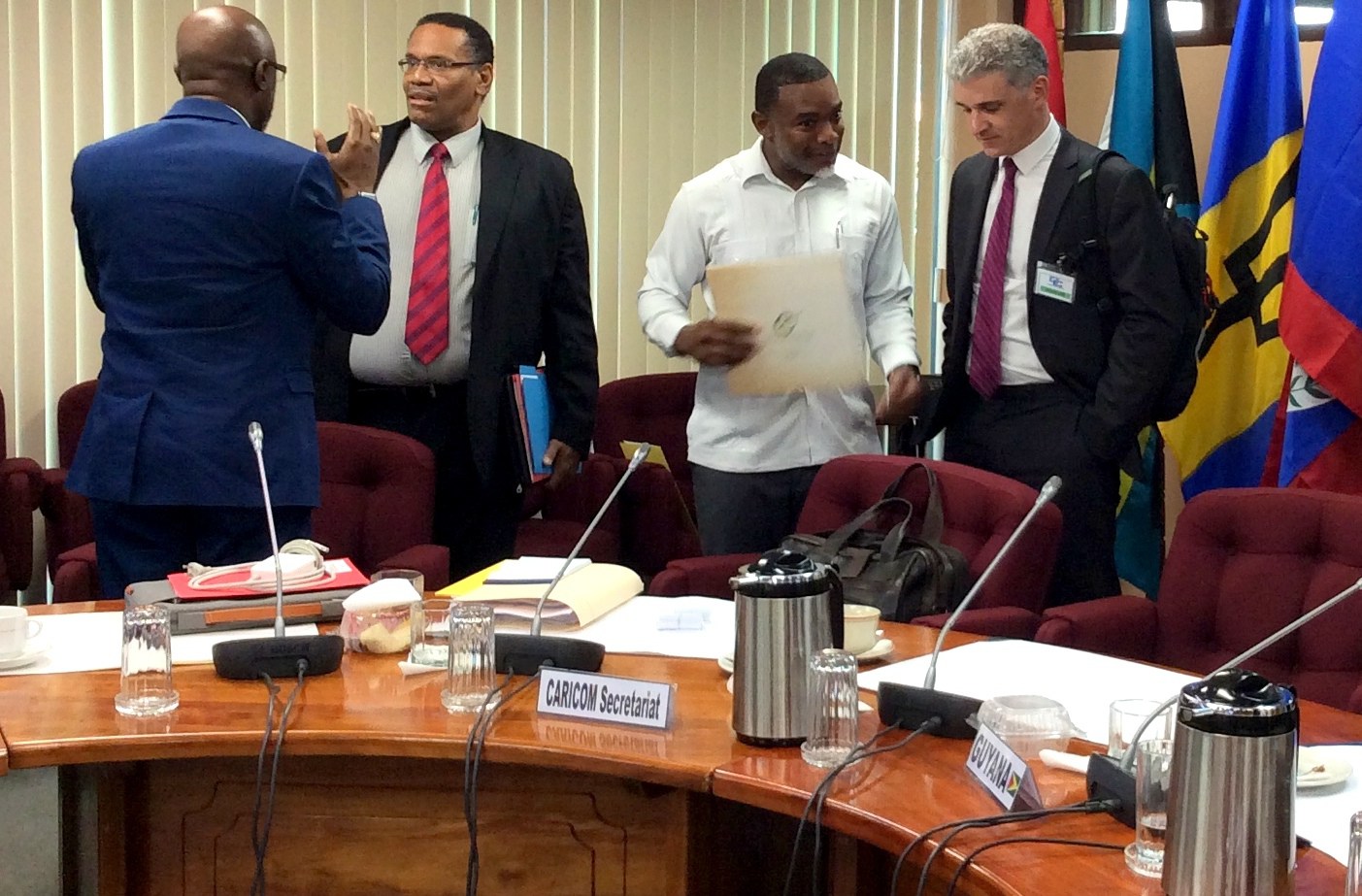 Guyana is firmly committed to pursuing the path of renewable energy (RE) and energy efficiency (EE), and has taken initiatives that testify to that obligation. The country has embraced the concept of a Green Economy, which is intended to provide a holistic, integrated approach to national development. This encompasses areas such as effective waste management, efficient water management, clean transportation, energy efficiency and energy conservation, and renewable energy usage, according to Guyana’s Public Infrastructure Minister, Mr. David Patterson.

The Minister made the comments during a Guyana Energy Round Table discussion at the Caribbean Community (CARICOM) Secretariat on 2 December, 2016, where opportunities for synchronising the regional and national plans towards a sustainable energy pathway came under focus. The Round Table was jointly organised by the CARICOM Secretariat and the Guyana Energy Agency (GEA). Representatives of state and semi-autonomous organisations in Guyana, as well as stakeholders in the regional private sector and regional and international institutions, and international development partners, met for the half-day session. The event concluded activities to mark CARICOM Energy month, which was observed in November.

The discourse provided good reason for optimism. The Guyana Government intends to generate most of the country’s power from renewable energy sources by 2025. In its budget for 2017, the Government has set aside US$5M (GY$1B) to be spent on renewable energy and energy efficiency initiatives, including around 1.36 MW of rooftop solar power generators on government buildings as well as around 0.4 MW of utility‑scale solar power that is to be developed in Mabaruma.

“It’s a small amount relative to the country’s requirements, but it is a significant start. It allows us, for instance, a gauge of integrating renewable energy into the existing (distributing) system,” said Minister Patterson, who led the Guyana team to the discussion.

The expectation is that a majority of the investments in renewable energy systems in Guyana will be derived through public-private partnerships and the Government is therefore offering incentives for those wishing to invest in renewable energy. For instance, the Government is seeking private partnerships for almost three MW of solar power in Lethem (0.4 MW), Mahdia (0.8 MW) and Bartica (1.5 MW). The government is also taking steps, through the deployment of appropriate legislation and incentives, to promote the importation and use of electric and hybrid electric vehicles in Guyana as a means of introducing sustainable energy use into the transport sector.

According to a recently-completed (IDB) study, Guyana’s optimal generation mix, using its existing grid, should comprise 150 to 180 MW from hydro-power; 26 MW from wind energy, 6 MW from solar energy, and 15 MW from co-generation, particularly from sugar sector using bagasse, with some (though limited) contribution from wood waste and biomass residues.

A key task lies in the identification and achievement of balance so that the country optimises development of its commercial fossil potential without retarding investment in its RE resources and EE potential. With regard to the latter, the example of Trinidad and Tobago was cited by Dr. Thackwray ‘Dax’ Driver of the Trinidad and Tobago Energy Chamber. Dr. Driver pointed out that the lack of attention to efficient energy use resulted in that country, on account of an availability of cheap, indigenous fossil energy sources, being among the most energy‑intensive societies in the world.

It was argued that the Government of Guyana needed to exercise “great judgement and care” in managing – perhaps even avoiding altogether – energy subsidies, as it sought to provide cheap power to reduce operating costs and domestic expenditures on energy service, and improve the competitiveness of the productive sectors. It was agreed that the energy governance arrangements, including policies, incentives and, where necessary, subsidies should be suitably crafted to promote sustainable energy production and use, so as to improve the economic well‑being of Guyanese.

The Guyana Government’s focus on sustainable energy production and use through the significant renewable options at its disposal, as well as the promotion of eco‑efficiency, are congruent with CARICOM’s sustainable energy pathway. The pathway is articulated within the Caribbean Sustainable Energy Roadmap and Strategy (C‑SERMS) objectives and targets which seek to: (i) Increase the aggregated RE power generation within the Region from its current 9.7% to 48% in 2027; and (ii) Reduce energy intensity by 33% , relative to the 2012 baseline of around 13,000 BTU (British Thermal Units) per US$ of GDP.

The Round Table discussion highlighted the potential opportunities and synergies for the Guyana energy sector to benefit from the regional strategic planning process and action plans.

Simultaneously, the discussion highlighted that the indigenous, especially renewable, energy potential within Guyana was great and their development may be stymied by the small size of the national markets. According to CARICOM-Assistant-Secretary-General-Joseph-Cox, this provided opportunity for a holistic approach to energy that struck the right balance between the needs of energy exporting and energy importing Member States. This would allow energy to “travel” from countries in which there was excess, cost‑effective resources to those with the highest demand, and would serve to increase energy security within the Region.

There was the view expressed that the pace of development within the regional energy sector depended on the pace at which Guyana moved. The argument was raised that Guyana’s energy role in CARICOM could also be viewed within a context where the country provided “cheap, green products” to the Region, thereby reducing the need for these to be obtained from energy‑intensive sources, once the huge clean energy potential was maximised.