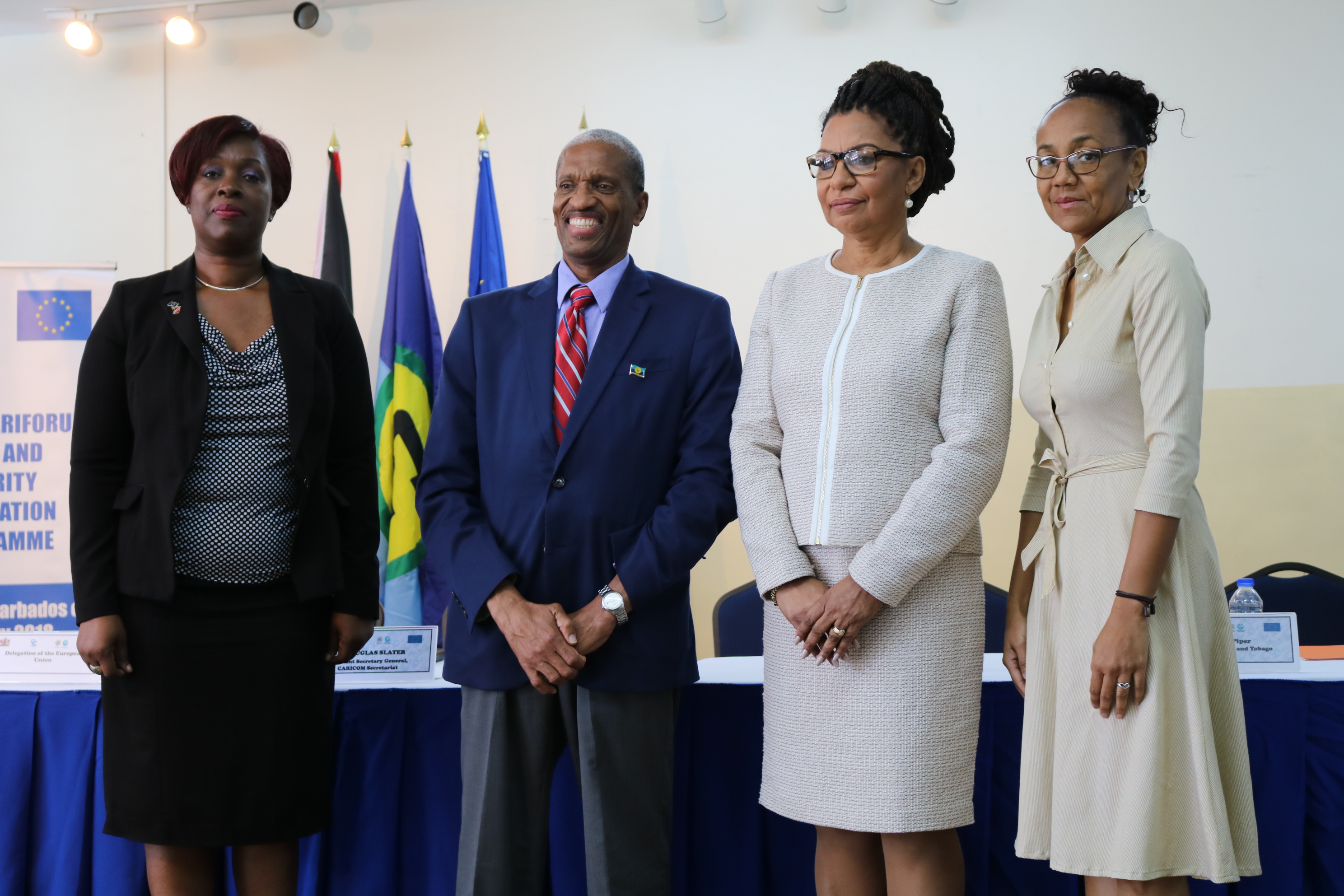 The importance of investing in youth, including treatment and rehabilitation for those who are using and addicted to alcohol and other drugs, was underscored at the Official Opening of the Regional Adolescent Training Workshops on 4 February 2019 in Trinidad and Tobago. To this end, partnerships, relevant policies and adolescents’ prevention programmes, among others, were emphasised by speakers who represented the CARICOM Secretariat, Delegation of the European Union, Organisation of the American States (OAS) and the Government of Trinidad and Tobago.

The initiative will build the capacity of more than 50 representatives working with adolescents and youth from the Caribbean Forum (CARIFORUM) States.  An activity under the Drug Demand Reduction Component of the EU-Crime and Security Programme, funded under the Tenth EDF, the workshop’s objective is “to strengthen the capabilities of persons working with adolescents and youth to understand and appropriately respond to those with problematic drug use”.

According to CARICOM Secretariat Coordinator, Health and Human Development Beverly Reynolds, “ building capacity to effectively respond to the drug challenge in this population group  is part of the thrust to ensure sustainability of the DDR programmes, post-project”.

Participants, drawn from various sectors, including Social Work and Social Protection, Education, Youth, Youth Work, Adolescent Health, Law Enforcement and the Justice and Probation System, are undertaking six days of training and will be tested at the end of the exercise.  Those who are successful will receive certification from the University of the West Indies.

The opening of the intervention was headlined by Parliamentary Secretary (PS) in the Ministry of National Security, Hon. Glenda Jennings Smith, who spoke of the centrality of citizens to the country’s development and emphasised the need for inclusion.

“We must ensure that our society evolves into one where no one is left behind…where all citizens are accorded equal opportunity to access social services and all our citizens including the most vulnerable such as our elderly, children and youth, are cared for and treated with dignity and respect”, she said

She said also, she was “encouraged that the modules to be delivered in this workshop, included a focus on adolescents in conflict with the law”, and expressed her optimism on the outcome the interventions.

The Organisation of American States’ representative, Mariana Piper, in her remarks noted that the Caribbean was a high area of priority for the OAS, and that the programme being implemented was a model of the translation of research to programmes.

Ms. Piper referred to research which showed high levels of substance use among students in successive Secondary Schools across the Region which, she said, was supported by the Diagnostic Assessment of the Region in 2012.

The OAS representative called for consideration to be given to “drug dependency as a chronic disease that must be dealt with as a core element of public health policy”, and emphasised the need for partnerhsips.

“As we pursue solution-based interventions for drug dependent offenders who are in conflict with the law, the training offered by this programme is a clear demonstration of the interdependence of the issues with which we all treat, and underscores the need for ongoing collaboration, both internally and externally”.

The need for partnerships was reiterated by the EU representative Monica, Paul-McLean, who noted that the intervention was a “shining example”.

“The concept of shared responsibility and partnership can become the basis for international cooperation and the EU will continue to promote just that”, she said.

“It means intervening early and keeping kids out of gangs, in the first place…. The drug problem cannot be seen as a law enforcement issue alone. It is also about poverty, unemployment, social exclusion and education, she said

She pointed out it was for that reason that” the EU’s safety and security related programmes in the region do not only upgrade the infrastructure of law enforcement agencies, but also promote community cohesion and include risks facilitiates that give troubled youths to change the trajectory of their lives before the problems become uncontrollable.”

The CARICOM Secretariat Assistant Secretary-General for Human and Social Development, Dr. Douglas Slater, reiterated the timeliness and relevance of the intervention.

“The focus on adolescent and youth and on building capabilities among those who interface and work with them on a daily basis is in keeping with the Social Resilience Pillar of the Community’s Strategic Plan.  It is also in keeping with the Human Resource Development Strategy which seeks to enhance factors and capabilities for improving education and life-long learning”, the ASG said.

The workshops run from 4-9 February 2019. Regional Master Trainers will instruct participants from modules developed by CICAD/OAS in the areas of Adolescent Development; Screening and Assessment; Trauma and Trauma informed Care; Adolescents in Conflict with the Law; Adolescent Drug Treatment and Family Interventions.

The CARICOM Secretariat is collaborating with the Executive Secretariat of the Inter-American Drug Abuse Control Commission (CICAD) of the Organisation of American States and the Government of Trinidad and Tobago, Ministry of National Security National Drug Council on  this event.