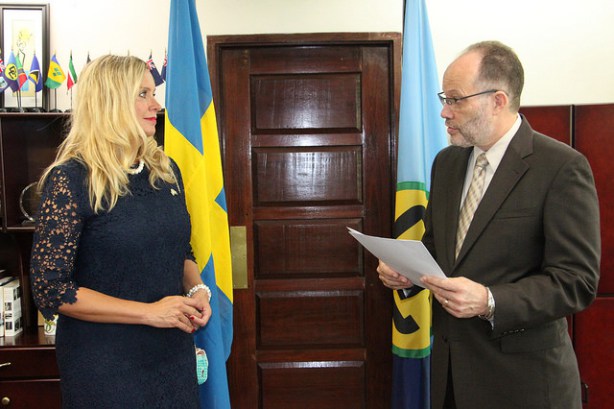 Her Excellency Elisabeth Eklund and CARICOM Secretary-General, Ambassador Irwin LaRocque, during the accreditation ceremony on Wednesday

The Caribbean Community (CARICOM) believes that a new model for development finance needs to be considered.

Speaking during the accreditation ceremony for the new Swedish Ambassador to the Community on Wednesday at the CARICOM Secretariat’s, Turkeyen, Guyana headquarters, CARICOM Secretary-General Ambassador Irwin LaRocque stated that GDP per capita should not be the principal measurement used in determining the development status of a country.

“We will continue to advocate for the use of a more accurate and realistic measure of development which considers vulnerability, including exposure to natural disasters and other exogenous shocks,” he said. “In the interest of realising our economic aspirations as a Community, we believe that a new paradigm in development finance needs to be considered,” he added.

Her Excellency Elisabeth Eklund presented her credentials to the Secretary-General who noted that her accreditation was a continuation of years of building bilateral relations with the Member States of the Community and a bi-regional dialogue between CARICOM and the countries of the Nordic region. Sweden is one of the countries in the Nordic Group with which CARICOM has a Memorandum of Understanding (MOU) on Political Dialogue and Cooperation.

Ambassador LaRocque recalled two interactions between the Community’s Foreign Ministers and the Swedish Foreign Minister Her Excellency Margot Wallström which addressed issues of mutual interest including Climate Change, Renewable Energy, Oceans, Trade in Small Arms and Gender Equality. Some of these are reflected in the MOU.

The Secretary-General welcomed Sweden’s efforts as a non-permanent member of the United Nations Security Council to raise awareness in that forum of the importance of the conservation and sustainable use of marine resources. This, he said was one of the priority areas of our Region and the Community looked forward to Sweden’s continued support for UN Sustainable Development Goal 14, which seeks to “conserve and sustainably use the oceans, seas and marine resources for sustainable development”.

He pointed out that “our countries are vulnerable to economic and environmental shocks compounded by the effects of climate change. Therefore, global agreements on sustainable development and climate change are of special significance for the Community.”

“Most of our Member States bear a heavy debt burden, brought on in large measure by reconstruction after major climatic events, in a Region designated as the “most natural disaster-prone in the world,” he added.

Ambassador Eklund stated that the UN was central to Sweden’s foreign policy and the UN’s Agenda 2030 was a top priority. She listed humanitarian actions, poverty reduction, sustainable development and Climate Change as areas of interest for her county.