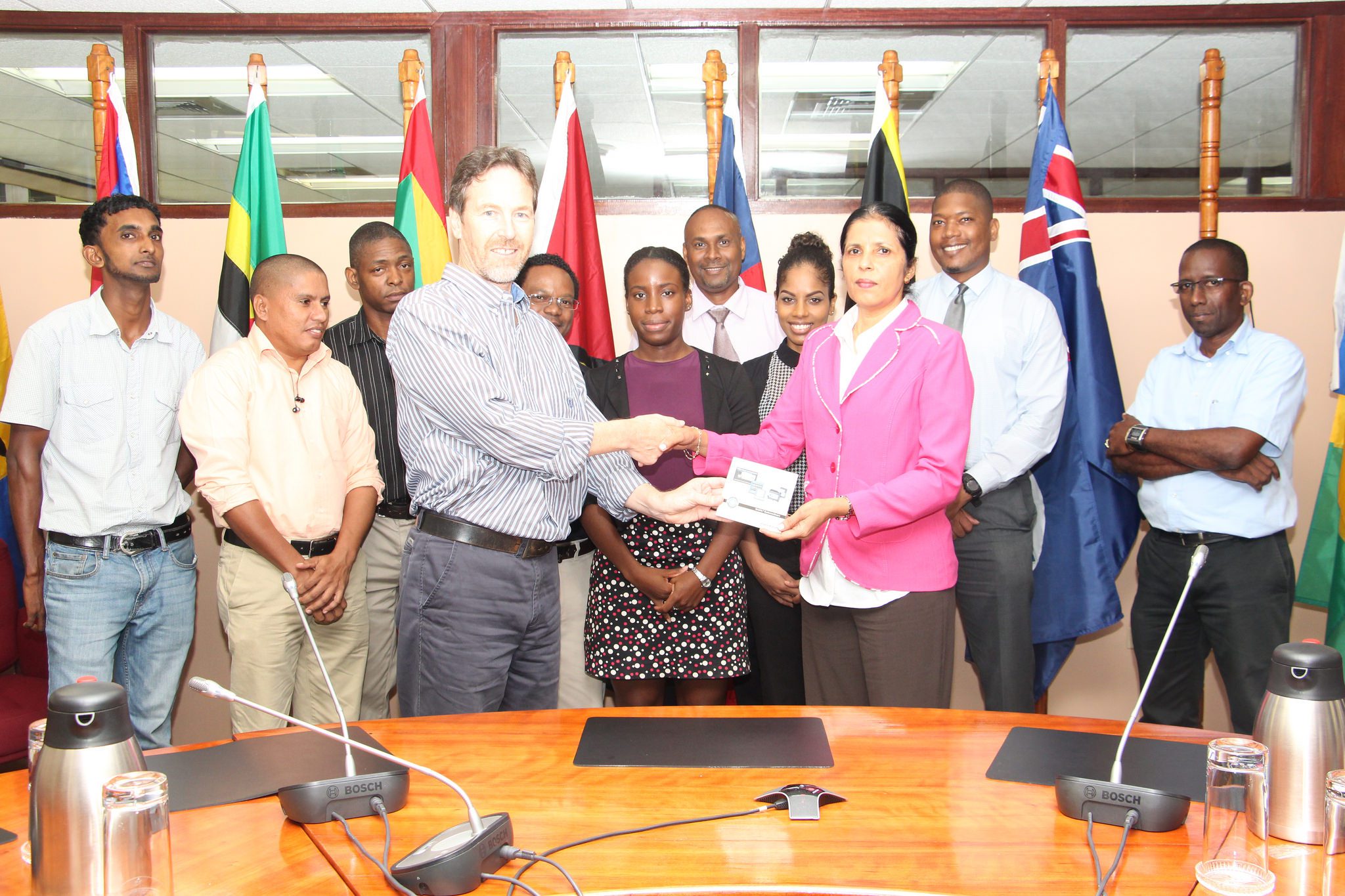 Mr. Glynn Morris of the GIZ/REETA Programme hands over the software to CARICOM DSG, Amb. Manorma Soeknandan PhD., in the presence of other CARICOM Secretariat staff members

The Caribbean Community (CARICOM) Secretariat is positioning itself to be a model in energy efficiency in the Region.

At a simple handing over ceremony on Tuesday, 2 May, of a piece of software to monitor and measure energy use in the Secretariat, CARICOM Deputy Secretary-General, Ambassador Manorma Soeknandan PhD., said that the efficiency that could be gained from use of the software would accelerate financial savings in the organisation. Smart use of energy could also lead to a change in attitudes, professionally and personally, she said.

The GRIDVIS software, presented by the Government of Germany through the German Agency for International Cooperation (GIZ) through the Renewable Energy and Energy Efficiency Technical Assistance (REETA) Programme, is compatible with equipment that the Programme handed over to the Secretariat last year. The equipment is being used to provide sub-metering to monitor the consumption of electricity by the major devices within the CARICOM Secretariat Headquarters Building. The equipment also enables the collection of detailed temperature, humidity and carbon dioxide data, which is necessary for the monitoring of indoor air quality and comfort.

Mr. Glynn Morris of the REETA Programme said that the equipment and software fall under the CARICOM Building Energy Efficiency Project (CARICOM BEEP) that was developed by the Energy Unit of the CARICOM Secretariat and that has been underway for about two years.

The CARICOM BEEP has been mainstreamed within the Secretariat and a Project Management Committee, chaired by the Deputy Secretary-General, is providing oversight. The BEEP utilises a protocol that constitutes a mix of energy management practices and principles, energy efficiency applications and renewable energy use. Activities under the BEEP are aimed at providing example and proof to Member States of the tangible benefits that can be derived from addressing the efficiency with which energy is used in public buildings across the Region, as promoted under the CARICOM Energy Policy and the Caribbean Sustainable Energy Roadmap and Strategy (C-SERMS).

The positive experience of the BEEP activities in the CARICOM Secretariat led to an expansion of the initiative across the Community to support other major administrative buildings, including the Organisation of Eastern Caribbean States (OECS) Commission Headquarters in Saint Lucia.

In the Community, a high proportion of electricity generated and supplied was in buildings – nearly 50 per cent – and the BEEP Project presented a good opportunity to manage and save energy, Mr. Morris said. He pointed out that the BEEP Project had shown energy and foreign exchange savings, generally between 12 and 18 per cent, and in some cases, about 20 per cent.

“We know we are saving energy”, he said, but the software and equipment “will allow us to learn a little bit more about what is happening within the system: how is it really being saved and how we can accelerate those savings”.

“We are showing by example what can be done”, he said, adding that the CARICOM Secretariat could be pioneering and spearheading a regional programme which had “real benefits to everybody.”

“This is something positive…The CARICOM Secretariat building should become a model for our Region of what can be done“, the Deputy Secretary-General agreed. She warned, however that if there was not a change in work ethic “we would not be able to have the optimal savings, which is very important, so it depends on our own use of energy”.

She pointed out that the software and equipment has the capacity to measure energy use in quadrants of the Secretariat. The future, she said, could include measurement of the use of energy versus the productivity of quadrants, and an indication of the cost attached to the Secretariat’s energy use. Adjustments could therefore be made to ensure that there was smart productivity.

The high cost of energy is of concern to the Executive Management of the CARICOM Secretariat since paying energy bills is becoming more difficult and continues to divert funds from other areas, necessary for the efficient operation of the organisation.