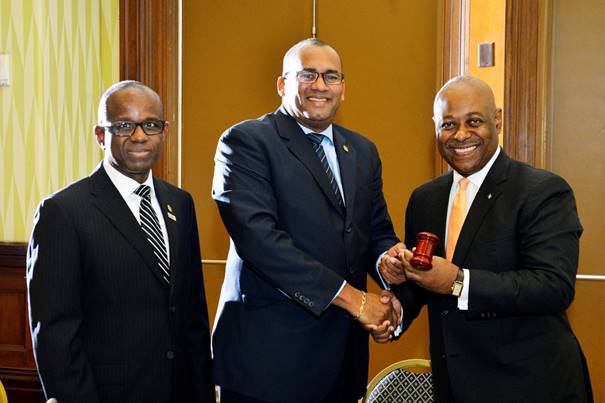 BRIDGETOWN, Barbados  (15 September, 2016) – The Bahamas is now Chair of the Caribbean Tourism Organisation (CTO), with the election of its Minister of Tourism Obie Wilchcombe.

The election took place on 15 September in Barbados at the organisation’s annual general meeting during the CTO’s State of the Tourism Industry Conference (SOTIC).

Following his election, Mr. Wilchcombe stated: “I intend to build upon what [immediate predecessor Richard Sealy of Barbados] began and I also intend to build on the relationship with the private sector. I’ve always thought that CTO is the body that provides equity and we can; and the way is to speak with the same voice. We also have to deal with the issue of inter-regional travel.”

Minister Wilchcombe succeeds Barbados’s Minister Of Tourism and International Transport Richard Sealy, and will serve a two-year term.. It is his second stint as chairman, having previously been elected to the position in 2002.

Today’s vote was in keeping with the CTO constitution which mandates that elections must be held every two years.

This year’s conference at the Hilton Barbados Resort is organised in collaboration with Barbados’ Ministry of Tourism and International Transport and the Barbados Tourism Marketing Inc and is sponsored by LIAT, the Caribbean Airline and Libris by Photoshelter.

Minister of Tourism and International Transport for Barbados and CTO Chairman Richard Sealy has a special message on SOTIC. To view the message, please click on the following link: http://bit.ly/2comjPC and for more information on SOTIC, including how you can register, participate and benefit, visit www.sotic.onecaribbean.org.

‘There is much to be proud of’ – SG tells St. Kitts and Nevis