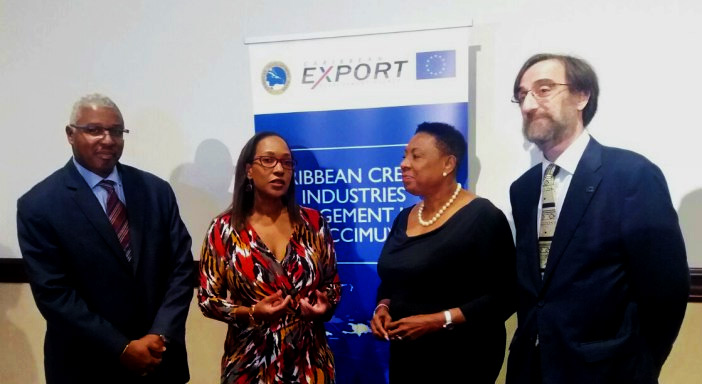 Featured
Officials chat during the stakeholder consultation on the establishment of the CCIMU in Jamaica on April 12, 2016. From left are: Edward Greene, Division Chief, Technical Cooperation Division, CDB; Pamela Coke-Hamilton, Executive Director, Caribbean

Kingston, JAMAICA, April 13, 2016,  – The Caribbean is renowned worldwide for its creative culture, including music, folklore, crafts, festivals and carnivals. Despite making some progress in developing the cultural and creative sectors, the Region has lagged in translating its creativity into substantial economic gains.

This reality prompted the Caribbean Community (CARICOM) Heads of Government at their 26th Intersessional meeting held in February 2015, to recommend the establishment of a Caribbean Creative Industries Management Unit (CCIMU), a dedicated body to address the needs of the Region’s cultural and creative industries.

Further to CARICOM’s recommendation, on Tuesday, April 12 in Kingston, Jamaica, 28 stakeholders representing the creative industries of the Region gathered for a historic consultation. This meeting set the path for the creation of the CCIMU. When established, the Unit will address the needs of the regional creative industries—including business development, trade opportunities, and the protection of artists’ and stakeholders’ intellectual property rights.

The creative industries have shown impressive growth in terms of contribution to GDP in many Caribbean islands such as Saint Lucia and Trinidad and Tobago. Yet the sector is faced with a number of challenges.

The biggest gap has been the absence of a structure that looks at the monetisation of the creative industries for the Region. We lack a framework that actually measures or gives tangible voice to what needs to be done, how or what data can be collected, how it can actually be monetized, and how we can benefit from intellectual property value in the creative industries,” said Pamela Coke-Hamilton, Executive Director, the Caribbean Export Development Agency (Caribbean Export). Caribbean Export has been assigned the lead role in the development of the CCIMU.

The Caribbean Development Bank (CDB) is providing funding for technical assistance to support the establishment of the CCIMU, through the staging of stakeholder consultations and the development of a business plan for the Unit.

CDB is pleased to be a partner in driving the establishment of the CCIMU. We view the creative industries as key to improving the competitiveness of the Caribbean economy and to guiding our Region toward sustainable social and economic development,” said Edward Greene, Division Chief, Technical Cooperation Division, CDB.

Mr Jesús Orús Báguena, Chargé D’ Affaires a.i., Acting Head of Delegation of the European Union to Jamaica, Belize, The Bahamas, Turks & Caicos Islands and Cayman Islands, during his opening remarks, stressed that there was a huge potential for the Caribbean’s creative industries through the Economic Partnership Agreement (EPA) signed in 2008 “by opening the EU market beyond WTO commitments in the services sectors, including creative and entertainment industries.” “Filling the EPA with real life is about carrying out an ambitious reform agenda, creating an enabling environment for business and developing the competitiveness and capacity of the private sector to engage in trade,” he added.

The Honourable Olivia Grange, Minister of Culture, Gender, Entertainment and Sport, Jamaica, in her remarks, welcomed the involvement of the banking and export sectors in the creative industries and brought attention to some of the achievements thus far in the sectors’ economic development.  In addition, she offered suggestions as to how the group could chart the way forward, avoiding duplication in the process.

At the one-day consultation, stakeholders made recommendations for the proposed CCIMU. They heard presentations on the concept of the CCIMU; best practices from other countries and regions; and examples of models that best suit the CCIMU, including gender-sensitive marketing and communications strategies and a sustainability plan.