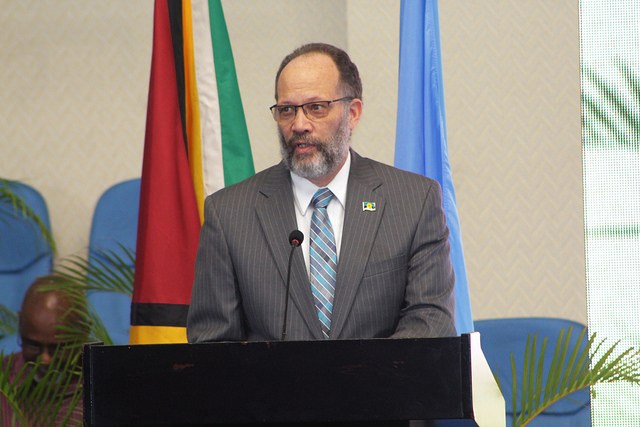 Delivering remarks at the opening of the International Civil Aviation Organisation (ICAO) Air Transport Conference at the Guyana Conference Centre on 21 November 2018, the Secretary-General said CARICOM Member States, which are Members of ICAO represent a distinct geographical grouping and, “request a seat on that basis.”

Underscoring the importance of the voice of Small States around the table of the ICAO’s Council where decisions are made in respect of international civil aviation, he said:

“At present, the one seat allocated to the Caribbean is being determined by a body which has a minority of CARICOM membership…CARICOM States are seeking to be represented in the category which applies to States that have been elected in order to achieve full geographical representation on the Council.”

In registering another concern, he highlighted the Meeting’s focus on practical solutions to remove regulatory impediments to air transport liberalisation.

This discussion was timely, he said, as the Region seeks to give effect to the Community of Interest Principle which provides for the Caribbean and other small states within regional groupings with practical measures to operate air transport services, a device to enable the designation of airlines.

The multi-faceted Principle recognizes the need for small states within regional groupings to act as a single entity, and, on that basis, as long as the ownership and control requirement is met by a single member of the group, the airline of that state so designated, is allowed to treat the entire community as its “home” base.

“We would like to apply that Principle when the Community enters into negotiations with Third States, with a view to obtaining flexible air transport arrangements. We seek your support in maintaining the COIP at the 40thICAO Assembly scheduled for September 2019,” Secretary-General LaRocque told the meeting.

The Meeting which ends on Friday 23 November in Georgetown, Guyana, is the culmination of consultations which commenced in 2014 linking ICAO, CARICOM and Africa. It was underpinned by the theme Promoting Connectivity for Sustainable Air Transport Development establishing connections among air transport, measures to liberalize the industry, quality aviation infrastructure, and sustainable development.

Secretary-General LaRocque noted the Community’s support and appreciation for the work of ICAO.

“ICAO’s co-operation with Member States of our Community, the CARICOM Secretariat and the Caribbean Aviation Safety and Security Oversight System (CASSOS) is of great value to our transportation sector, given its role in the economic and social development thrust of our Community,” Secretary-General LaRocque said.

Underlining the importance of aviation to the Region, he said:

“There is no doubt that safe, efficient and cost-effective transportation within this Region is of critical importance to our regional integration process. Given the geographic spread of our Member States, such a transportation system is essential to fulfil the goal of free movement of people and goods. It is equally important in fostering the spirit of community among our people. It would also facilitate the growth of tourism that is so crucial to the economies of our Member States.”

That was the impetus, he said, which led CARICOM Heads of Government to approve the CARICOM Multilateral Air Services Agreement (MASA) last February, expanding the scope for airlines owned by CARICOM nationals to go to new markets within the Community.

The Agreement allows for no restriction on routes, capacity or traffic rights among the participants. It was intended to facilitate increased intra-regional travel and provide more cargo options for exporters and importers with resulting cost savings.   In essence, it provides the required regulatory framework within which a CARICOM air carrier can provide air transport services between the Member States which are Parties to the Agreement, Secretary-General LaRocque told the meeting.