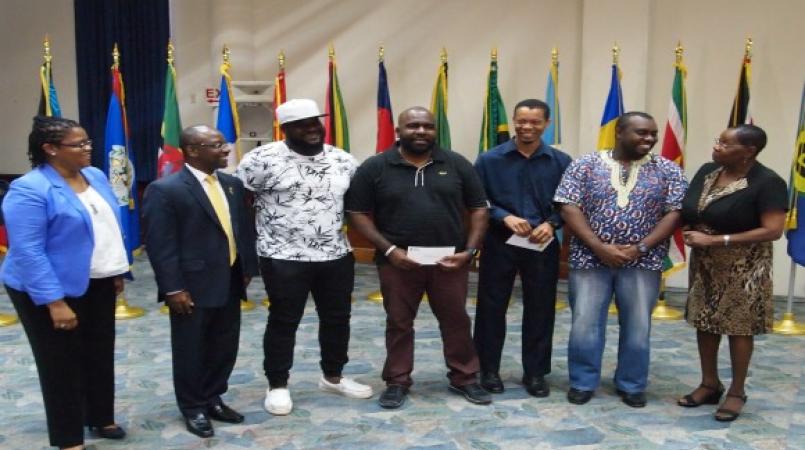 A veteran graphic grapher and seasoned jingle producer were each awarded USD$5,000.

Darren Holder and Alan Lowe have succeeded in leaving their mark on ‘the Olympics of culture’ having emerged as the winners of the Caribbean Festival of Arts (CARIFESTA) jingle and logo competition respectively.

The winners were announced during the 13th meeting of the Interim Festival Directorate (IFD) and presented with a cheque valued at USD$5,000 each.

Holder said he has been writing music and producing jingles for close to ten years with the jingle for Sunpower and the Barbados Workers Union being his most popular work. He said he was able to use the wealth of experience gained over the years to produce the winning CARIFESTA jingle. The jingle was a collaboration between Holder and Barbadian music producer Dwain ‘Dwaingerous’ Antrobus and it was sung by upcoming soca artiste Joaquin.

Lowe, a veteran graphic designer, explained the concept behind his piece which he called a ‘mix in of images.

“If you look at the logo there is a variety of different things that come together. It can actually be broken down into several images. One of the things I wanted to capture was colour and motion and history and folklore. You can see the fish, that is the reference to Barbados and the flying fish and then there is the sun which I like to call the sun of cou cou behind it. If you look closely you can pick out the incline of a face with the two eyes, one being big and one being small. There is also a character created by the empty white space between and that is a masquerader. So you have the masquerader in the big costume and the head in sort of the guitar idea and there is even the idea of a flower.”

The two were presented with their prize this morning from Minister of Culture Stephen Lashley and Dr. Hilary Brown, Program Manager for Culture and Community Development of the CARICOM Secretariat.

The 13th edition of the festival comes off on August 17-27, 2017 in Barbados and is being held under the theme: Asserting our Culture, Celebrating Ourselves