Communiqué issued at the conclusion of the Nineteenth Meeting of the Council for Foreign and Community Relations (COFCOR) , 9-10 May 2016 Saint Vincent and the Grenadines 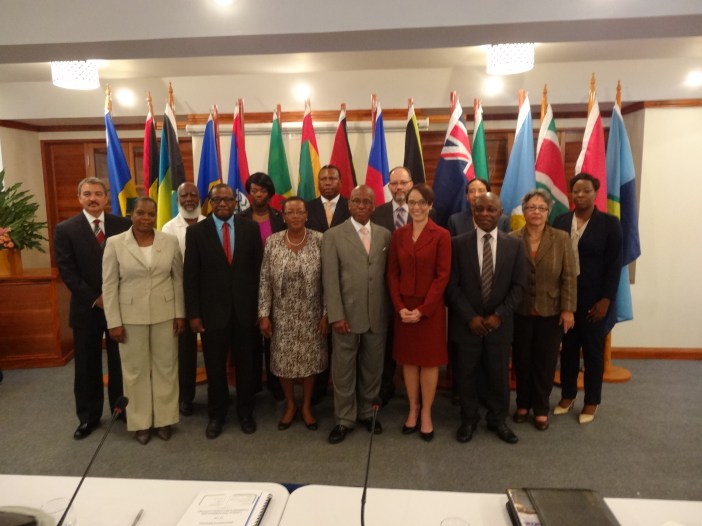 CARICOM Foreign Ministers, other Heads of Delegations and the CARICOM Secretary-General share a group photo at the start of the 19th Meeting of the Council for Foreign and Community Relations (COFCOR), Monday

The Nineteenth Meeting of the Council for Foreign and Community Relations (COFCOR) of the Caribbean Community (CARICOM) took place in St. Vincent and the Grenadines, on 9-10 May 2016, under the Chairmanship of the Honourable Sir Louis Straker, Deputy Prime Minister and Minister for Foreign Affairs, Trade, Commerce and Regional Integration of  St Vincent and the Grenadines.

In his remarks to the COFCOR the Secretary-General of the Community, Ambassador Irwin LaRocque, underscored the critical role of the Meeting of the Council for Foreign and Community Relations to reflect on, strategise and co-ordinate regional foreign policy.  He underlined the importance of the Third International Conference on Financing for Development, the United Nations Summit to adopt the 2030 Agenda for Sustainable Development and the UN Framework Convention on Climate Change (COP21).  He also emphasised the importance of coordination of foreign policy by the Community’s Member States in having their interests taken on board at these critical global meetings. The Secretary-General, took the opportunity to emphasise the need for the Region, in its external relations to continue to deepen its traditional links even as it seeks to forge new ties. He flagged the issues which CARICOM identified as of grave concern to the Region’s economic development,  including graduation of middle income countries from access to concessionary funding, the withdrawal of correspondent banking services, and the continued unfair labelling of CARICOM States as non-cooperative tax havens.  He stressed the importance of continuing to raise these matters in its bilateral meetings.

He posited the need to build on the momentum of the events of 2015, to the benefit of CARICOM, including action on climate change and the normalisation of US-Cuba relations. He noted the presence of CARICOM nationals in a number of key international posts and extended  congratulations to Baroness Patricia Scotland and Ambassador June Soomer for their successful candidatures to the Head of the Commonwealth Secretariat and the Association of Caribbean States, respectively.  He also recalled that Ambassador Patrick Gomes and Dr Carissa Etienne are the Secretary-General of the ACP and Director of the Pan-American Health Organisation respectively. He congratulated Barbados and Guyana on their coming milestone celebrations of 50 years of independence.

The outgoing Chairman, the Honourable Minister Alva Baptiste of Saint Lucia, noted the advancement of the CARICOM integration process against the current backdrop of dynamic changes.  He charged the Community to confront those changes with moral and political fortitude, indicating that the COFCOR was particularly tasked with ensuring an effective, strategic and coherent strategy for the Community.

The Minister highlighted initiatives undertaken by the Community in areas such as prevention of the spread of the Zika virus, reparations for native genocide and slavery, CARICOM Secretariat reform, energy, border issues and climate change.  He also applauded the success of the interventions of Member States in addressing the threat of climate change and encouraged continued diplomatic efforts to deepen relations with new and traditional partners and to engender growth.

The incoming Chair of the COFCOR, the Honourable Sir Louis Straker, observed that the Nineteenth Meeting of the COFCOR was another opportunity for the Community’s Foreign Ministers to meet and deliberate on critical issues facing the Region, while at the same time mapping out a way forward.

He made the call for Member States of the Community to reaffirm their commitment to enhance intra-regional engagement for the benefit of its Peoples.

The Minister indicated that he looked forward to the enhancement of the coordination of the Region’s foreign policy.

Ministers recalled the Community’s historic diplomatic and political relations with Cuba and that country’s generous technical assistance to the Region. They welcomed the process of normalisation of relations between the US and Cuba.

They noted with concern the ongoing debate regarding the possible exit of the United Kingdom from the European Union and discussed the implications of such a development for the Community.

Foreign Ministers met with their counterparts from the Kingdoms of Sweden and the Netherlands and exchanged views on matters of mutual interest with a view to enhancing their bilateral cooperation and relationship.

Discussions with Her Excellency, Margot Wallstrom, Minister of Foreign Affairs of the Kingdom of Sweden, centered on issues such as climate change, renewable energy, water management, ocean security, and citizen security. The proposal by Sweden and the Nordic countries to conclude a Memorandum of Understanding to facilitate cooperation in a range of areas was also discussed.

The COFCOR also engaged with His Excellency, Bert Koenders, Minister of Foreign Affairs of the Kingdom of the Netherlands, on issues of critical importance such as the issue of climate change, particularly its impact on SIDS and low lying States.  While acknowledging the diplomatic success of COP21, the urgency of operationalisation of the Agreement was stressed.  The role of the Kingdom of the Netherlands as the current President of the EU was also discussed as well as the concerns of the Community over blacklisting by EU Member States, and the withdrawal of correspondent banking services, both of which had an adverse impact on CARICOM States.

Foreign Ministers considered their relations with a number of Third States and regional groupings, as well as important development partners with which the Region enjoys long-standing ties. Acknowledging that many of these relationships are undergoing dynamic changes, they considered how best to position the Region to take advantage of these changing realities. They also deliberated on the Region’s priorities and challenges within key regional, hemispheric and multilateral bodies.

Ministers recalled the productive discussion held with their UK counterpart at the recently concluded 9th UK Caribbean Forum where they reaffirmed the Forum as an important mechanism for cooperation and the strengthening of the relationship.

In relation to the United Nations, the COFCOR recalled the active participation of the Community in the successful meetings in 2015 on Financing for Development, the 2030 Agenda for Sustainable Development and Climate Change (COP21).  They noted the significance of the outcomes of these meetings for CARICOM SIDS. Foreign Ministers encouraged the early ratification of the Paris Agreement as well as putting in place mechanisms to ensure access to climate financing  such as the Green Climate Fund.

Given the importance of the maritime environment to the sustainable development of SIDS, they also discussed the Region's response to matters relating to the United Nations Convention on the Law of the Sea (UNCLOS) on the Conservation and Sustainable Use of Marine Biological Diversity of Areas Beyond National Jurisdiction (BBNJ) and called for greater attendance of Member States at the annual meeting of the International Sea Bed Authority (ISA).

They noted the observance of the Tenth Anniversary of the Convention on the Rights of Persons with Disabilities (CRPD) and the importance of the adoption of the Petion-Ville Declaration of 2013 by CARICOM Member States.  They underlined the importance of implementing the proposals of the Declaration in ensuring the rights of differently-abled persons in an inclusive society for all.

CARICOM Foreign Ministers pledged the Community’s continued commitment to the work of the Association of Caribbean States. They also welcomed Cuba’s appointment as Chair of the Executive Board of the ACS and their hosting of the Seventh ACS Summit scheduled for 4 June 2016 in Cuba, and reaffirmed the importance of CARICOM’s participation at the highest level.

Foreign Ministers reflected on the activities that CELAC will undertake in 2016 following the Fourth CELAC Summit which took place in Ecuador in January 2016. They articulated CARICOM priorities within CELAC, including matters critical to Small Island Developing States and low-lying coastal States, implementation of recently concluded global pacts such as the 2030 Agenda for Sustainable Development, COP21 and Financing for Development, cooperation with sub-regional integration mechanisms and with extra-regional partners. They reiterated the Community’s solidarity with Ecuador following the devastating earthquake and aftershocks that ravaged that country in April 2016 and expressed condolences to the families of the victims.

The Ministers expressed their full support for the role of the United Nations Secretary General and his efforts, in keeping with the provisions of the Geneva Agreement, to bring the controversy to a definitive and judicious conclusion.

The Ministers reiterated the firm and unequivocal support of the Caribbean Community for the maintenance and preservation of Guyana’s sovereignty and territorial integrity.

Foreign Ministers received an update on the most recent developments between Belize and Guatemala.  The Foreign Ministers deplored the recent escalation of tensions caused by troop mobilisation. The Meeting supported the critical role of the OAS in working with Belize and Guatemala to expeditiously and deliberately adopt protocols that would govern the interaction of both countries on the Sarstoon River that defines the southern boundary between Belize and Guatemala. The Meeting further called on all Parties to strictly abide by the confidence-building measures agreed to as early as 2005. The COFCOR called on Belize and Guatemala to move deliberately toward mechanisms necessary to bring the matter to the International Court of justice for final resolution following the holding of referenda on submission of the claim. The COFCOR emphasised its resolute support for the sovereignty, territorial integrity and security of Belize.

The Meeting took note of the anniversary of the sinking of the Bahamian naval vessel, HMBS Flamingo, on 10 May 1980, and the tragic death of four Able-Bodied Seamen – Fenrick Sturrup; David Tucker; Edward Williams and Austin Smith.

The Ministers expressed their sincere appreciation to the Government and people of St Vincent and the Grenadines for the warm hospitality and excellent arrangements afforded to the participants of the Nineteenth Meeting of the COFCOR. They looked forward to the convening of the Twentieth Meeting of the COFCOR in Suriname in 2017.